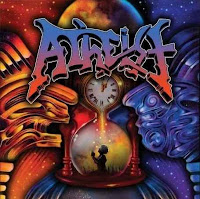 Unquestionable Presence: Live at Wacken is not only a reasonable account of Atheist in the flesh, but a catalyst to consolidate the band's return to the field after about 15-16 years of general silence. That a band so loaded with interesting ideas was cut well short of its time after but three studio albums (all in close succession) was a travesty. But here was a hint at last that they would return and rearm themselves. Unfortunately, the package is saddled with a second disc that is nothing more than a compilation of previously released material. A veritable waste of space. Atheist was and is a highly specialized act with an appeal to a niche of the death and progressive metal audience that already owns this stuff, so just about anything would have been better. How about tossing the Beyond demo on as the second disc? Or a few unreleased, rare odds and ends? Nah, let's just give the people what they want to hear: what they've already heard, unless they've been living under a rock for two decades, but possibly even then...

Well, the live disc at least is admirable, with a nice resonance from an appreciable audience from the Wacken Open Air 2006 festival. It offers a clean tone in the guitars, and a thick, oozing undercurrent courtesy of Tony Choy, and a clear glimpse at Steve Flynn's jazzy transgressions. Kelly Shaefer doesn't sound as if he'd skipped a beat in the intermittent silence of the band's career, and might even have ramped up his mayhem (which I can confirm, now having listened through the new studio album Jupiter from 2010). The eight tracks are culled exclusively from the band's classic Piece of Time (1989) and Unquestionable Presence (1992) albums. Though I mildly prefer the latter in its studio incarnation, I must admit that the oldies are the best of the litter here: "Unholy War" and "Piece of Time" sound particularly vital and fresh, trailed by "On They Slay". The track listing does favor the Presence material, though, and of these: "Mother Man" and the title track sound the best, followed by "Your Life's Retribution", "An Incarnation's Dream", "And the Psychic Saw".

The compilation is delivered in chronological succession, and unlike the live set, all three albums are represented. Interestingly enough, all four of the Unquestionable Presence tunes from the set were included. "Piece of Time" and "Unholy War" are joined by "I Deny" and "Room With a View" from the debut album; "Mineral", "Water" and "Air" are the proxies for the divisive Dimensions. I won't deny that these are mostly positive selections from the catalog, and yet I can't help but feel ripped off, once more, by a label exploiting the resurgence of interest in one of their 90s-heavy artists (Roadrunner was guilty of a bunch of these). Granted, Relapse was not the band's original imprint, so the tracks had not appeared through them, but I assert that a better bonus disc might have vastly increased the value of this release for the fanbase. For the live disc alone, it might be worth hearing once or twice, though nothing deviates from or really exceeds the earlier studio fare. But this glass is only half full, and if a second disc was to be included, it should have been more worthwhile.