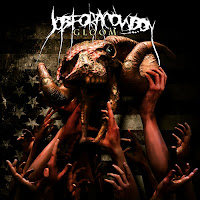 Arizona deathcore mavericks Job for a Cowboy seem to be very fond of the short form release, having peppered their career with a number of EPs and singles around their two full-lengths. Gloom is just the latest of these, expanding upon the Misery Reformatory single the band issued through iTunes this past April, and I have to say that it shows some of the band's strongest songwriting to date, as the band continues to expand and refine its sound into something more than the cliched, divisive sub-genre from which it first sprung. There are four tunes here, most following a similar dynamic pattern that marries explosive blasting to carefully crafted leads and faster breakdowns than the band have used in the past.

One thing I noticed when listening through "Misery Reformatory" and "Plastic Idols" is Davy's increased use of more tortured, raspy vocals, like a deathcore 'Dani Filth' perhaps. Try not to curl your lips up in disgust at the thought however, because these are actually helpful in carving out any potential monotony from the proceedings that might manifest through the ceaseless and percussive use of grunting. Another is that the band have become simply more 'musical', as with the lead sequence of "Misery Reformatory", where the rhythms guitars create an intrinsic bliss of blunt action as they lead into the great melody at 2:35 over the double bass. Of course, if you are simply looking for your ass to be kicked in ritual brutal death or deathcore fashion, you've got the monstrous "Execution Parade" and its concrete limb breaking foundation, or the acrobatic and high strung closer "Signature of Starving Power" which alternates between explosive thrust and tightly wound breakdowns with a bit of tech thrashing.

Love them or hate them, Job for a Cowboy have done their proverbial 'job' here by keeping the material tense and interesting, with an improvement in personal efficiency and proficiency. The kids can play their instruments, they can take a step back and write something better than what they've accomplished in the past, and even though they're unlikely to turn the heads of the crowd who loathe all things to have ever borne the -core suffix, much less the tech death or brutal tech scenes of modernity, they are succeeding where many others are not. Gloom is not the sort of release I'll be spinning very often, and it's not as good as their 2007 full-length Genesis, but there are a handful of explosive riffs and lead sequences that caught my ears on their continued adventure towards identity. A full-length of this quality with a marginal increase on riffing focus would not be unwelcome to my ears.