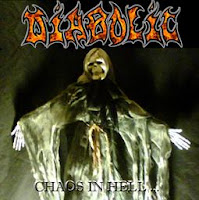 In another twist on the Diabolic path, vocalist/bassist Paul Oullette would return to the Florida hellfire equation for their 2nd EP in two years: Chaos in Hell..., which is more or less business as usual. Those who preferred the band's more mindless, driving efforts such as Vengeance Ascending or Infinity Through Purification will find themselves in the familiar terrain of Coates incessant blast work and a storm of ferocious but forgettable riffing interspersed with loony, extra-dimensional leads that stand out on principle alone. Like its predecessor, Possessed by Death, this is a pretty short work, only about 10 minutes of material used to help the band cement some label interest and keep the fans in tune that they still exist.

My problem here is the same that I've had with some of the albums I listed above, in that the straight streak of brutality simply is incapable of conjuring much riffing worth a damn. A song like "The Suffering Church" at least breaks into a semi-spectral bridge of old school thrills, but so much of the playtime is devoted to dry and effortless guitars that fail to evoke anything resonant to the brain. Oullette sounds solid enough back in his musical chair, but still similar to an Erik Rutan or David Vincent and relatively indistinct against the field of similar artists. A lot of that bleak and infernal depth and curvature that made an album like Subterraneal Magnitude worth hearing is vacant here, its a straight race to the finish that offers little entertainment on its side lines or its pit stops.

If you're really into Covenant, Blessed Are the Sick, Conquering the Throne, and King of All Kings, then this would be as good as any a place to start exploring Diabolic's discography, but the material is simply not as strong or dynamic as Subterraneal Magnitude or even the band's debut Supreme Evil. The production is stronger than Possessed by Death, but the writing is less compulsive and atmospheric. A better value when the two are joined together in the 2008 Deathgasm re-release, but not altogether strong.