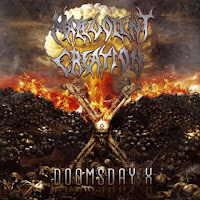 Doomsday-X is another of those Malevolent Creation releases which musters just enough courage and independence against the band's bland but punishing history to merit some attention, even if only a minimal amount. There is nothing great happening here, but the band manages to incorporate enough variation and death/thrash propulsion to keep the listener on edge through both the double bass heavy slam segments and the hyperactive streaks of splatter and speed. The band had orchestrated a subtle shift towards prominence with the previous record, Warkult, and I had hoped for some strong capitalization upon its momentum, which this is not, but at least they don't really lapse into mediocrity.

Doomsday-X is an album that does reek of 'process', and whenever that process is even slightly alleviated, it begins to grow stronger (sort of like The Fine Art of Murder). It begins on a note of surprise with the blissful leads of "Cauterized", but then pummels and channels through a slew of pretty average, faster paced mayhem until the morose, thoughtful muted melodies deep within "Culture of Doubt". It's these sparse moments of baited elegance that help break up enough of the monotonous brutality to make a functioning record, and Phil Fasciana and company are wise to persist in such dynamics, so you'll have the grooving, potent thrasher "Dawn of Defeat" right up against the lead-glazed chuggernaut "Prelude to Doomsday", or the spiky, searing "Strength in Numbers" following up the springy, semi-tech balance of "Upon Their Cross". Doomsday-X is hardly possessive of those gorgeous, destructive riffs that make for a death metal legend, but at the same time it succeeds in never growing boring, perched upon the listener's attention span even if it never drills straight through his/her brow.

The mix of the album is direct and workmanlike, a characteristic the band is well regarded for. You don't listen to Malevolent Creation for atmosphere, you listen to them for a punch in the face, a kick in the groin to remind you that this music is about aggression. Hoffman's familiar, blood drenched and gnarled vocals do tend towards monotony, but they'll do. The lyrics aren't the best of their career, but they've got a good meaning to them that often tackles the social and political construct head on rather than just dabbling solely in serial killers and stalkers. Perhaps the most important factor to this album, though, is that the longstanding Florida maniacs show no real signs of aging. They sound like they had just sprung up in the 80s, fists flailing about as they teach the young whippersnappers a lesson in pain.