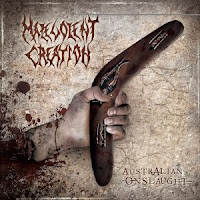 It seems like a third Malevolent Creation live album in the space of a decade would be about the last thing anyone could want, and yet it exists in Australian Onslaught. Having already hit the North (Live at the Whiskey a Go Go) and South American (Conquering South America) audiences, the Florida fivesome now turns its broken and battered husk to the Down Under, a lively crowd who had never before gotten the chance to see the band on their home turf. And a show they shall have, with over 67 minutes of recorded material here and the best production of the three such albums released through the Arctic Music Group. But does anyone care?

Apparently, somebody must. Like the Whiskey a Go Go album, this features the vocals of the original frontman Brett Hoffman, and he spends quite a bit of time between tracks chatting up the audience. Often, this is your typical f-bomb dropping 'n shit, because after all, all BRUTAL fucking death metal bands are fucking too fucking insane not to, right? Fuck yeah. But there are also some moments of honest humor, like Hoffman mentioning that gray hairs have grown on his head and balls in the time it took to get over to Sydney. The track list has quite a number of redundancies from the Whiskey live: "Blood Brothers", "Living in Fear", "Coronation of Our Domain", "Manic Demise", "Eve of the Apocalypse", and "The Fine Art of Murder" all rear their trampled heads again, while a few surprises manifest like the "Memorial Arrangements" intro from The Ten Commandments. There are also a handful of tracks taken from the band's latest effort (Doomsday X) by the time of this recording: "Deliver my Enemy" and "Cauterized", the latter being one of the most exciting on the disc with its thrashing rhythms.

Like its predecessors, you're getting an adequate if not excessively exciting set list from one of the hardest working (if not standout) acts in the field. And this time, it sounds better, in that the ferocity of the guitars, the vocals and drums all measure up with one another. But that shouldn't imply that Australian Onslaught warrants a purchase, because its fresher tone is dragged under by the very redundancy of its existence, and the selection of songs that, despite their competent execution, feel a little rundown by 2010. A new studio album (Invidious Dominion) had come out several months prior to the live, and its more worth your time, but if you absolutely must own a Malevolent Creation live album, this is certainly no worse than the others. Perhaps if they decide to issue a European, Asian or African live there will be a bit more to it.