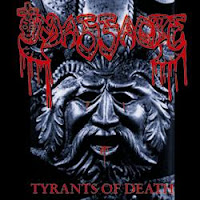 While I can't claim Massacre has ever penned a song or album of due significance, their presence around the dawn of the 90s and the accumulation of ex-Death members into the lineup would pretty much ensure that the band stand the test of time as a cult notion. By that token, its a wonder that it took a decade beyond the unfortunate abortion that was Promise to release some sort of fan package. The band had been understandably cast into the shadows of brutality, but Iron Pegasus brought forward the Tyrants of Death collection just a year before nostalgia would take its course, Kam Lee and his fellows reuniting through the ensuing years for several sparse gigs.

Tyrants of Death does what this sort of compilation is supposed to in presenting the band's formative demo material into a convenient space and format for both old school admirers and inquisitive, younger fans, but it does not do so completely. The Aggressive Tyrant and Chamber of Ages demos (both 1986) are presented in their entirety, but The Second Coming (1990) is absent. Granted, that would get its own re-release in a few years, but it seems rather arbitrary to separate the stuff, even if its from different phases of the band. The remainder of this release is padded out by some live material recorded early in Massacre's career (1986), in their native Tampa, Florida, and an unfinished recording of "Cryptic Realm".

Admittedly, the demo material itself has a crude, crass character to it which I find superior to the full-length album versions of several of these songs. Lee's vocals are ripping and raw, while the bass and drums seem incredibly driven and brutal for the day, and both Allen West and Rick Rozz's guitars (from the separate demos) sound fucking crazy. It gives you that same, primordial appeal as the first time you experienced Slayer or Possessed, which in my opinion is simply all the more memorable and biting next to the tidier From Beyond. Of course, a few of the tracks ("Chamber of Ages", "From Beyond", "Symbolic Immortality", "Cryptic Realm") were once more recorded for that album, but here you get a handful that you've likely never heard, and the Aggressive Tyrant demo cuts feature West's Hellhammer-like tone, primeval and punkish with wild leads cutting through.

On the other hand, the live tunes tend to suffer from a weak mix in which the vocals and guitars dominate the rhythm section, but for 25 years ago one can suffer through it. Prior to the live version of "Aggressive Tyrant", Kam sends a shout out to a 'Dave Vincent' who has come down to see the show. Peculiar. There are also a pair of tracks in this setting not redundant from the demos: "Perpetual Domination" and "The Traitor", the former of which bleats out a steady, Obituary styled groove; and a live version of "Corpse Grinder" (the Death tune) is included. This is pretty much straight for the collectors and fans, and its approved by original members of Massacre like Kam Lee and Michael Borders, born of legitimacy more than an empty cash grab. I won't say that the writing is all that great even on the non-album stuff, but it wasn't unpleasant to experience another forgotten gem in the crown of this long lauded Florida scene.