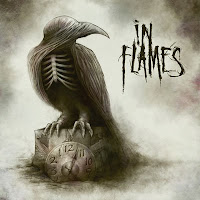 In a maneuver that surprises no one, the first post-Strömblad album from In Flames continues to polarize the band's fan base and tread ever closer to the pop rock orientations that have been hinted at for almost a decade (beginning around Reroute to Remain). The modus operandi of the previous album returns: big hooks, emotional vocals that alternate between happiness and despair, traditional/power metal inspired solos, and plenty of modern metal grooves to sate the festival audiences whose moshing aspirations include anything with a guitar mute. If anything, it pushes well past A Sense of Purpose into the terrain of pure, mainstream heavy rock, with the faint traces of the band's 90s melodic riffing structures the one thing anchoring it to any semblance of the band's backlog.

Now, I happened to enjoy A Sense of Purpose, much to my shock. There were about 7-8 songs there that mustered memorable guitar patterns, overly whining but effective vocals, and a nice variation in grooves and tempos, and the rest of the record did not fall far behind. I'm honestly not opposed to In Flames doing whatever the hell they want with themselves, as long as the music entertains, and even if it wasn't perfect, that album seemed to strike a good balance of their modern elements and the songwriting skill of the prior decade. Sounds of a Playground Fading builds upon similar aesthetics, only heavily favoring the slower to mid-paced fare and cleaning up on the processing of the production. There's much more clarity to the rhythm guitar and a lot of positive punch to the heavier sections, yet the lion's share of the new tracks seem to lack that same level of explosive energy that had my ears buzzing with the most bliss I had for the band since Whoracle. Some even feel like neutered, cardboard cutouts of previous tunes.

For example, the 2nd riff in "Puzzle", my favorite song on this album, is strikingly similar to a number of patterns used in "Disconnected", "The Mirror's Truth", and so forth, but at least it compensates with a passionate momentum and some uplifting atmosphere. The title track has a lot of the rhythmic bounce that dominated Reroute to Remain, with pleasant but predictable fills that don't inspire much hope for the rest of the fare. There are mild electronic influences (as in the intro to "Where the Dead Ships Dwell") and acoustic intros ("All For Me", "Fear is the Weakness"), but these are all par for the course after the previous set of albums, and they aren't writing anything so sugary here that this diversification brings strength to the song structures.

Then there are a few songs that feel plain weak. "Jester's Door" is this self-referential, spoken word piece which had me gagging up my lunch. I'm not sure if it's a metaphor for Jesper's time with the band, or refers to the constant criticism leveled at the band for their ever morphing sound strategy, but its cheesy and should have been left on the cutting room floor. "A New Dawn" feels like an attempt to channel back to the times of Clayman or Whoracle, but the dual melody is simply too familiar, the grooves entirely lackluster. "The Attic" and "Liberation" see the band more directly in pop/modern rock terrain, the former a moody piece with atmospheric guitars and mostly whispered vocals, the latter radio rock with echoing guitar lines redolent of Amorphis on Tuonela...

Yeah, sure, great. So you can write mediocre rock songs that abandon the metal of your youths. Are these anything more than emo exercises for Anders? You can write them. That doesn't mean you HAVE TO, and such pieces serve only to the detriment of this record, unless In Flames are trying to land a spot on the soundtrack to the latest season of The Hills. Again, I'm not in opposition to such branching out, but the Swedes will always be the best at their heavier material, and Sounds of a Playground Fading ultimately needs a lot more of it to choke by. There are some decent cuts here ("The Puzzle" and "Ropes") that adapt and refine the tactics of the last album, but where I found myself unexpectedly in step with that effort's blaze of glory, I just kept drawing blanks this time. Sounds of a Playground Fading is hardly their worst, and I got more out of it than, say, Soundtrack to Your Escape, but its not about to win them many new friends.

Posted by autothrall at 6:54 AM