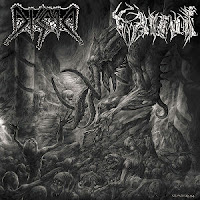 Here we've got another incredibly matched split 7" release from two of the better retro bands spewing out the old school love. Finland's Winterwolf, who released an excellent debut in 2009's Cycle of the Werewolf, have an excellent pedigree which includes Antti Boman of Demilich (known as Abominator here) and Corpse of Deathchain; while Disma, from New Jersey sport several members of the death doom upstarts Funebrarum, and grumbler Craig Fucking Pillard who you may remember from a few Incantation records called Onward to Golgotha and Mortal Throne of Nazarene! In other words, two of the best growlers the genre has ever had, right where they belong, fronting newer acts that deliver upon their 'charms', on a split record with superb cover art...

Unfortunately, each of the band's only brings a single track to the table, and looking at the listing for the forthcoming Disma full-length, it appears "Of a Past Forlorn" will also be present there, so I can't say that this split has an immense, inherent value outside of the collector sect. Both of the artists have some similarities in their mesh of authentic death & doom with the old school, Swedish sprung power in the guitar tone, but they use this to their full advantage. With "Eaters of the Cross", Winterwolf create a dire melodic intro redolent of formative era Entombed, with a ghastly ringing of bells and an extensive sample from the British cult classic The Curse of the Werewolf (1961), though I can't say that the song maintains its quality all that much once they burst into the faster paced material, outside of one good riff in the bridge. Disma's cut features more guttural, resonant vocals, and doomed passages, especially the closer.

I have admittedly heard better from each of them, on the Cycle of the Werewolf full-length and The Vault of Membros demo, but the split choices are a fairly strong showing. I'd have to give Winterwolf credit for that intro, but the Disma tune is stronger overall. The production is powerful and raw in each case, the bands adequately summoning the cavernous credibility so popular in this newer wave of bands. But I reiterate: this is a collector's item, its brevity barely worth putting on your record player to risk any scratch to its surface. A more substantial full length split or even a handful of added tracks would have improved its value exponentially as far as the audience, but instead this is just a limited press item you'd want on display or in your bin of tasty rarities that you might likely never listen to. The songs are certainly decent, but its just not that substantial, and you're better served heading straight for the full-lengths.