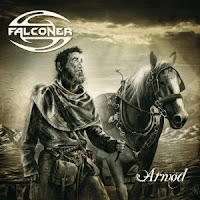 Falconer's previous album Among Beggars and Thieves was one of the most criminally unsung releases of 2008, a fantastic proof of concept that affirms all of the band's work to that point: the member changes, the songwriting, the struggle for identity. Finally, there was a folksy power metal band worth hearing, and I'd rank that release well above anything that its constituents had previously involved themselves in (including anything in Mithotyn catalog). Seeing that the band has held onto the same lineup and cover art aesthetic for the followup and 7th full-length Armod, I have been sitting in some anticipation to hear it, and now that I have, I can attest to some measure of satisfaction, even if this is not quite a timeless equal to its predecessor.

There are mild differences here, like the decision to place more of the lyrics directly in Swedish tongue, but otherwise its got the same careful balance of folkish elements with surging melodic power metal, gleaming leads and most importantly, Matthias Blad's clean and versatile pipes. Unlike many of their peers, Falconer's Jimmy Hedlund and Stefan Weinerhall pride themselves on notably complex song structures, not necessarily in terms of each individual riff, but the way the patterns fall together to create narrative variation, and the integration of the driving pagan black influence of Weinerhall's previous outlet Mithotyn. Tracks like "Griftefrid" and "Svarta Änka" explode in their execution, dire and cautionary streaks of notation that complement the use of choral or female backing vocals, without being disgustingly predictable like a lot of other frivolous folk metallers.

Speaking of the 'other F' word, there are quite a few tracks here that emphasize this element, and this alone, and though I often find myself yawning at the thought, Falconer succeeds in holding the interest through "Grimasch om morgonen" or the intro to "O, Tysta Ensamhet", each with somber fiddles affixed to the acoustic guitars. To be truthful, though, the metallic tracks do blow these entirely out of the water, and there a handful hidden in the depths here that are equivalent to much of the prior album: like the sailing and wailing, spacious "Grimborg" or the majestic plot of "Fru Silfver". There are some English translations included as bonus cuts, for "Black Widow (Svarta Änka)", "By the Rose's Grave (Rosornas Grav)" and "Grimborg", but I rather prefer to hear the material in Swedish, it feels more authentic, like watching a non-English foreign film with the proper subtitles.

Armod is certainly an enriched, professional experience with top of the line studio standards and musicianship, and you're very unlikely to hear anything else much like it. The one band that comes close is the Faroe Islands' Týr, but Blad's vocals are a little more natural and down to Earth and the Falconer music is busier. The riffs and vocal hooks here are never quite so heart stealing and distinct as the last album, but it's a solid enough offering that should quench the thirst of those starved for more of the same. Perhaps its a little closer in quality to Northwind than Amongst Beggars and Thieves, but I never felt burned or letdown in the slightest, just that a good handful of the chorus parts didn't cling to my lobes with the same, regal resin.