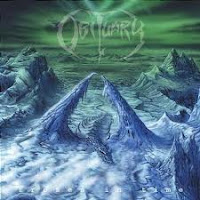 After an eight year hiatus from the studio, I had every expectation that Obituary might have stood back, assessed their career and perhaps turned back the clock to the years in which they produced not only viable, but exceptional death metal. Forget the heedless, grooving overtures of the mid to late 90s, forget the slam dance only crowd, and return to the creeping, beloved abominations of the past! After seeing the artwork for Frozen in Time, I was so sure that my prayers were to be answered that I gushed out to purchase the CD as quickly as possible. Within the first few tracks, I had realized my error, realized the risk of 'early adoption' in its most treacherous form: for this is the worst fucking album Obituary has released in their entire career, and that includes some pretty poor choices (The End Complete, Darkest Days, need I continue?).

Frozen in Time does not, in fact, return to the band's earlier years, nor in fact does it produce anything new of note. Sure, the influence from Cause of Death remains, loosely, but this album is an effect a hybrid of the band's hokey groove core circa World Demise or Back from the Dead, only those efforts possessed a saving grace in several of their riffs, sodden but memorable. That is not the case here, because the band have churned out the most half assed compositions of their career! Most of the songs contain no more than 1-2 riffs with meager variation, and even when they get something tolerable going, they repeat it unto oblivion, until you've no other choice but to angrily press the TRACK FORWARD button! Point in case: the bridge riff in "Blindsided". This horrendous, two note groove is one of the most amateur spectacles I've experienced in metal music. So weak that a band of 6-year olds into Six Feet Under would probably turn their snotty little noses up at it rather than commit it to tape!

But it's not alone here, joined by a cacophony of tripe such as the brooding groove of "Mindset", "Slow Death" or "Lockjaw". Yes, they spent as much time on the song titles as the music (not that Obituary has ever been complex in this regard). Even when the band picks up the pace mildly, as in "Back Inside" or "On the Floor", the material feels like nothing more than weak paraphrasing of tunes from The End Complete or Cause of Death. Let me not get into "Redneck Stomp" (yes, "Redneck Stomp"), a pedestrian slammer so stupid that it should have written itself out of existence. Add to this the rather brute, boring production of the album, lack of anything hinging on a good lead, and a phoned in John Tardy performance which does little else than vapidly repeat patterns he has already well covered on previous albums, and you've got one of the biggest faux pas in all of Florida death metal! An aberration of a once frightening, relevant entity!

Frozen in Time sucks. There is simply no excuse for such a work as this, least of all from a band who have nearly 20 years of experience in their field. Even the lyrics suck. They could write an album of this merit six times in a single afternoon, it's so lackluster. You could dissect, cut and paste riffs from any of their past albums using audio editing software, almost at random, and come up with something better. There are actually people who enjoy this? I say to these: earwax. Time to clean it out, lest another decade of deafness pass by in ignorance.