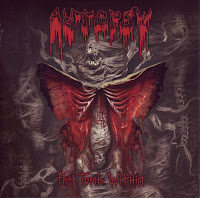 The Tomb Within might not necessarily live up to the hype this elusive legend has garnered since its career void and the ensuing reunion announcements, but it certainly plants the muddied, time worn boots of Chris Reifert and his joyous band of ghouls directly back into the sodden sepulchral wastes of better years. In a scene of progressively exquisite (oft to the point of inanity) technical arrays of extremity, it was all too obvious that a particular segment of the gore drenched populace would seek to reach back towards the tendrils of morbidity that imbued archaic death metal with such a memorable character.

Autopsy must seem a flagship for this frustrated faction, a band adorned with both the lewd passion and perversions of the old guard and the visceral fiber and versatility to persevere. This was not always the case though, and to some extent the riffs contained on this five track EP would bring back painful flashbacks to some of the less interesting Autopsy records, like the dreadful Shitfun and the mediocre Fiend for Blood EP. I don't care how much of a sacred cow the name brings with it, though, plodding and uninteresting riffs are not virtues for this or any other band, and those releases were wrought of such tedium: The Tomb Within, slightly less so. As a fan of the band's first two LPs and their classic Retribution for the Dead EP, I fortunately found enough satisfaction here that it increased my expectations for this new phase of existence, but not nearly the raving level of admiration I've seen spewed upon its meager, passable rationing.

"The Tomb Within" winds up in scathing feedback before delivering a burgeoning barnstormer of thick, punkish grinding that highlights the band's current level of production, which is honestly not all that different than cranking Mental Funeral a few decades back. I was just not into the riffs during the faster segment, they seemed a little too average, but the lumbering doom of its latter half does somewhat compensate. Most importantly, it reveals Reifert in a fine form, his gravelly tone grating against the sledgehammer, sludgy undertow like some necromantic pariah returned to his old haunting grounds to animate dust and limbs. "My Corpse Shall Rise" is sort of the opposite, opening with an archaic, appreciable death/doom sequence and then tearing into a flustered, flesh-ripping mass for the bridge and lead.

I did enjoy the flailing of "Seven Skulls", and the hardcore grunge and resonant vocals of "Human Genocide", but less so the somewhat tedious finale "Mutant Village". Considering the enormous hype that surrounded Autopsy's return to rights, I admit I expected far more, but this is at least a safe maneuver which plays up to the fans' expectations. There are more intriguing riffing structures on the following full-length, Macabre Eternal, which I've also had a mixed reaction to, but The Tomb Within seems like more of a straight shot to the fundamentals. I wasn't too fond of half the riffs and leads, but at least they got the atmosphere right, and that counts for a lot more than some might give due credit. Cool cover, decent way to kill 20 minutes, but they can and hopefully will have better to offer down the line.