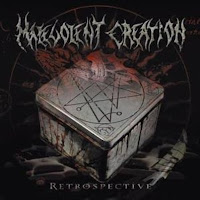 Alright, people. Enough is enough. What the fuck is this? The 4th Malevolent Creation compilation in under a decade? With all due respect to the band itself, is there really any purpose to such a fiasco? The answer is no. The fact is that Malevolent Creation are a pretty good death metal band. They've never written an album of total shit, even if they've never written a masterpiece. They've shifted a few labels over their career, understandable for any act that wants to survive in the long term but doesn't push a lot of record sales. Apparently, each of these labels wants a double dip into the licenses they hold, reprinting material from the studio albums just to sucker a few of the most rabidly obsessive fan/collectors, or those without the proper clue as to which of the band's full lengths to absorb.

Joe Black involved some rarities, demos, odds and ends, so I'm not going to dump too messily upon it. Sure, it sucked, but the band probably had something to do with it, and it was saintly compared to the next pair of molesters: 2000's Manifestation (through Pavement music), and 2003's The Best of Malevolent Creation (through Roadrunner). Both worthless pieces of plastic intended to subtly pad the pockets of the investors and label execs. And now Crash Music, the band's latest label, has added its greased phallus to the assault, with Retrospective, a gathering of Malevolent Creation cuts from the mid to latest period...in other words, well past the classics (The Ten Commandments, Retribution). But here's the catch: Crash Music is the label which absorbed Pavement. THEY ARE THE SAME LABEL. So basically, not only are you being spoon fed rehashed studio material, but you're being spoon fed material that was already used for the Manifestation comp! Oh, what foul times are these, when passing label thugs can foist death metal redundancies upon harmless old ladies. You'd think Phil Fasciana and his troops were the Beach Boys of death metal at this rate...

68 minutes and 17 tracks ordered chronologically, starting with material from 1995's Eternal ("Blood Brothers", "Living in Fear", "Alliance or War") and ending with 2002's The Will to Kill ("The Will to Kill", "All That Remains", "Rebirth of Terror", "Divide and Conquer"). Seven of the tracks had already appeared on the Manifestation comp, and there's only one exception on the entire track list: "Confirmed Kill", a rehashed song from MC's demo days, under 2 minutes of death/thrash slaughter that just do not add up to a great time. Sometimes a cigar is just a cigar. Sometimes a ripoff is just a ripoff. This is the latter. You can't even smoke it. If you lit it on fire, the booklet and tray card might alight for a few blessed seconds, but the plastic would just melt down in an unimpressive, underwhelming exhibition of boredom that mirror the release itself. Not worth the ink or casing. Not worth your time, or mine. Certainly not worth our money.