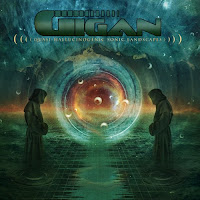 Quasi-Hallucinogenic Sonic Landscapes is an album I was holding out some hope for, primarily due to my enjoyment of the Gigan debut Order of the Third Eye, a crude but refreshing exercise in mathematical, grinding clamor and raucous, terrifying atmospheres. Great band name (I'm a bit of a kaiju whore), curious song concepts and titles, even if they reeked of that psycho intellectual excess that many extreme metal bands often mistake for coming off as 'smart'. Not necessary in Gigan's case, as these chaps can prove their level of brain activity through their chops, but it still plays up to their bizarre and almost alien sense for progression beyond the rigid confines of the death and grind genres.

Unfortunately, while the sophomore is a more frilly, precise experience than its precursor, I did not find myself sinking as deeply into it. The Floridians play a brand of controlled discord not entirely unlike a Psyopus or Discordance Axis. Not as annoying as the former, and not as manic as the latter. They can ramp up to the intense speed of an Origin, fuddle with tempos akin to Candiria on their crazier efforts, and I even tasted a hint of Voivod through the sparse bursts of eerie, dystopian dissonance. But I guess I was a little fooled by the cover and title, and had hoped the band would move into an even more atmospheric direction than the debut, which this is really not. The first two songs ("Mountains Perched Like Beasts Awaiting the Attack", "Suspended in Cubes of Torment") are tense but uninteresting, the band flexing their technical chops and Rush-like timing over runs of notes that simply don't cling to the ear. It's not really until "The Raven and the Crow" and its flailing, schizoid guitars and bouncing undertow that I started perking up to the patterns, especially deep in the bridge.

Another thing is that I just don't care for all of the vocals. They're not bad, sort of a blend of your typical death, grind and core styled grunting, a deeper alternative to Kelly of Atheist, but they seem rather tepid and dry whenever they're not dowsed in some effects or grating alongside a perfectly executed, spastic rhythm. For an album so condensed with maniacal, raw ability and packed with scores upon scores of riffs, painfully few of them really stand out against the sheer business of the compositions. Even the better tracks "Transmogrification into Bio-Luminoid", "The Raven and the Crow", "Fathomless Echoes of Eternity's Imagination") shift from brilliant, spacy jazzcore terrain or sonic abstraction to wide gulfs of spitting and stuttering madness that never quite feel ominous enough to break out the straightjackets. The workmanlike, grounded tones of the guitars likewise seem to betray the void surfing insanity. I realize the production will make the band seem that much more fluid and flawless in the live arena, but I almost wish there were even more tripped out effects, an even deeper chill breaking against the frenetic release.

For all these gripes, though, Quasi-Hallucinogenic Sonic Landscapes is still a reasonable curious experience, from a band that at least attempts to stake their own ground. Bands of this sort walk a fine line between utter irritation and rhythmic revelation, and Gigan clearly stick to the latter, even if such moments are few and far between. As far as technical delivery, this dances circles around the debut, sacrificing a little of Order's brutality for finesse, but a number of the pieces here feel too haphazardly strung together in the mosquito-mad metal rush of complexity. In the end, I feel that they are more interesting players than they are writers. Worth hearing if you're into Dillinger Escape Plan, Atheist, Pysopus or Discordant Axis, but I found the thrills somewhat sparse beyond my infrequent 'what the hell was that' reactions.