Killing Addiction - Fall of the Archetypes (2010) 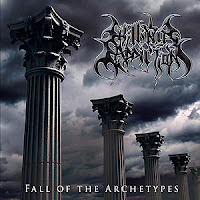 Killing Addiction was not a band many would have expected hearing from again, an obscurity from the South who never quite made their mark despite the ominous promise they produced in their Necrosphere EP (1991) and Omega Factor LP (1993). Nevertheless, the band found a second wind eight years after releasing the Dark Tomorrow EP, which too slipped under the radars of just about everyone, and decided to yet again broach their brutality upon the US death metal audience with updated production standards and the same compositional mold as Omega Factor. Fall of the Archetypes does not necessarily feel like a 'complete' album, since its just six new tracks joined by the Dark Tomorrow material, buts its enough to note that the band had not shaken from its foundations.

Alas, this not the spiritual update to the spacey and chilling Necrosphere material that I would have wished for, but a pretty straight death metal effort with brick rhythms and taut, punishing drums which is rarely able to distinguish itself from what is now a massive scene of similar acts. Don't get me wrong: Killing Addiction is not exactly generic gore death. They still like to weave in interesting lyrical subjects, but about half the new material sears along while the rest is moored in bland chugging that leaves little to the imagination. Such is the case for "Leviathan", a handful of average riffs bled into a nice, clinically death/thrashing bridge, or "Less Than Human", which sounded like a brutal update to Pestilence's Consuming Impulse without the amazing riffage. Whenever they appear to shine, the excitement is quickly dragged under by some filler guitar patterns.

Pat Bailey's vocals once had a resonant, crushing depth to them that was one of the more guttural voices out there (beyond Incantation), but here they just seem average, like a mid way between Karl Willetts and Martin van Drunen. Not that there's anything wrong with that, but along with the dearth of standout tracks, it adds up to an experience that might have been long in the making, but won't be long in the memory. That said, if you were a fan of Omega Factor, then there's little reason not to check it out, and for collection purposes, its nice that the band tacked on the second, rare EP. I've certainly heard a lot worse than this, but where once I felt the stirrings of imagination and cosmic oblivion (gimped by admittedly awful production), the unsung Florida quarter has yet to really capitalize...