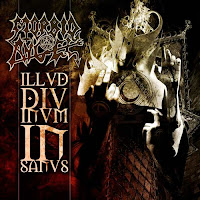 It's a testament to a band's enormity when so many fans hinge upon each new release as if it were some kind of life changing or universe altering event, and such is the case for Morbid Angel. I've found the Florida vets to have one of the most inconsistent careers in all the death metal genre, peaking on their debut Altars of Madness and then bouncing back and forth between forgettable arrays of half cooked ideas and sudden storms of cohesive creativity and brilliance. I've never been a fan of Blessed are the Sick, Formulas Fatal to the Flesh, or Heretic, for example, but on the flip side I've a highly vested interest in Altars, Domination and Gateways to Annihilation, several of which are themselves divisive offerings.

So, when a leak of the band's latest Illud Divinum Insanus trickled out 'mysteriously' some time ago, it stands to reason that the masses would erupt in predictable poo flinging, metal monkeys on a crusade to protect their natural environment from outside influences (i.e. the deniers of the potential career holocaust that Morbid Angel just might have unleashed). There was quite a wealth of jabber from both the audience and the musicians involved about the 'experimental' nature of this, the band's long anticipated 'I' album, but unfortunately, aside from its stylistic dissemination, there is pitifully little of the innovation or 'avant garde' about what Trey and his ever shifting lunatic parade have conjured forth this time. Illud Divinum Insanus is instead split pretty evenly between monotonous, electronically imbued chargers and then some rather paltry death metal filler that wouldn't have even been worthy of the band's previous disappointments.

So, yes. This time, the clouds of nebulous, negative chatter that acted as vanguard to this album's release seem to have been acute in their shocked and awed reactions, but at the same time, this is hardly the biggest misstep I've heard in the metal genre. It's bad, but not unshakable enough to lose sleep over. Much of the staggering propaganda seems to revolve around expectations that the David Vincent comeback album would somehow be something of magnificence, after his long stint with the Genitorturers. Or that Pete Sandoval would be unable to record the album, and so was replaced with Tim Yeung for the sessions. Or that it was the studio debut for newcomer Destructhor, who had previously impressed some audiences through Myrkskog and Zyklon. I can say with great confidence that none of these musical chairs have anything to do with the lack of quality upon Illud Divinum Insanus. Instead, it's the poor songwriting, poorly chosen pace of the record and stagnant ideas that will drag it into the latrine of infamy.

For starters, the first 9 minutes of this album are incredibly erroneous and weak. "Omni Potens" is a ritual intro piece delivered through boring synthesizer/horn lines and broken chanting, just as vapid as any of the interlude pieces from Formulas. Then there is "Too Extreme!" Do not adjust your screen. That's really the name of this brainless techno banger. Apparently the idea of 'innovation' here is to incorporate pathetic gabber beats that wouldn't have been impressive for a garage DJ in 1987 into a ringing and annoying cacophony of useless riffs that could find no other home, while Vincent rambles out crappy lyrics and a chorus in Spanish?! Once this nightmare has subsided, we get a streak of straight, familiar death metal through "Existo Vulgoré " and "Blades of Baal"; the same, pummeling blend of blasts and chugging that the band had perfected through albums like Domination to Gateways to Annihilation, only rendered wholly uninspiring due to the lack of memorable guitar patterns. Empty fists, beating the bored listless. The latter has a few spikes of excitement through the bridge, just not enough to save the song.

"I Am Morbid" feels like a vainglorious and cheesy march designed for the Morbid Angel faithful, but again it cedes into some pretty generic chugging/groove metal, while the next piece, "10 More Dead" might actually have pulled itself off without the lyrical flow that gives it a near gangsta rap approximation. What a waste of rhythm! Then we've got another of the band's awful techno pieces "Destructos vs. the Earth/Attack". Truly lamentable. In fact, how did this make it onto the album? How did it make muster? "Nevermore" is more of the pseudo-psycho groove driven ballast that many fans were probably hoping for. Perhaps the safest track on the album, so it's no wonder they used it as the advance single, but it's just nonetheless too easily fleeting from the memory chamber, a wax on/wax off of self-derivation. "Beauty and the Beast" is also familiar and forgettable, but still in the vein of Gateways/Heretic; while "Radikult" has some curious, bleeding melodies through it. Despite its 7 and a half minute bloat, I'd have to say it was the best track here. Just when you think the album might find some salvation, though, the generic gabber returns for the indistinct "Profundis - Mea Culpa", its sliding and schizoid guitar lines the only things going for it...

Illud Divinum Insanus plays out like an ill-informed mash of hurried ideas that needed far more time in the cauldron to come to a boil, but even if we were to trim away the needless techno fat, the meat itself is gamey malnourishment. Should we reduce this record to perhaps four tracks: "Radikult", "Nevermore", "Blades of Baal" and "Beauty and the Beast", then you'd have an EP of material possibly on the level of Heretic. The mix is functional, with the same punctuation and percussive tones the band have been using for years, and admittedly more solid than Heretic. Of course, functional is just not good enough, and neither are these songs. Eight years and nothing to show for it. A St. Anger. A victim of its own swollen expectations, sucking at the 'out of touch' trough, its only success riding on brand name alone. Surely Morbid Angel could do a lot better by their fans than this, but more importantly: they could do a lot better by themselves.