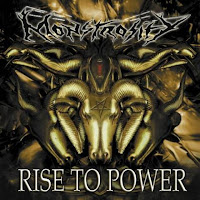 Rise to Power is the fourth Monstrosity album overall, the second and last with Jason Avery filling the vocal position, and it's also the most indistinct. Never a band on the edge of anything, they have long felt like some crossbreeding grounds for their Florida peers. Capable of the speed and precision of Morbid Angel's finer heights, the punch of a Deicide, and the carnal riffing of a Cannibal Corpse, they can turn tempos on a dime and each member contributes the necessarily level of required execution and proficiency. Whether you're in death metal for the grooves and breakdowns, or the fits of manic acceleration, this is a band with your back. Why then, with all of these things going for it, does Rise to Power fall behind their prior outings?

Well, it's pretty much your stock 'modern' death metal of the 21st century to date. Cognizant of its influences and the band's own legacy, energetic and thunderous, and without a single damned song worth remembering after the fact! If you turned down the speed dial on Hate Eternal's first few albums, and marginally weakened the riffs, it would probably sound a lot like this. In their defense, they were packing a pair of new guitar players since In Dark Purity: Tony Norman and Sam Molina, and despite this they do manage to create an aggressive, intense architecture through "The Exordium" and "Awaiting Armageddon". A few of the riffs feel mildly innovative, or putting to use more than just the band's speed and brutality, but I felt as if I were some party disinterested in gymnastics, forced to watch the acrobatic competitions at the Olympics. The guitars, as dynamic and terse as they appear, never manifest in patterns of revelation. This is fairly soulless death metal, with zero malignant undercurrent, and no amount of Lee Harrison's hammering skill or Jason Avery's monotonous, brutal drawl are able to rescue it.

It's a shame, honestly, because its fairly close to In Dark Purity in identity, but so far from the Corpsegrinder years in terms of an album you'll want to break out repeatedly. The production here is brick solid, and the instruments managed incredibly well, but there's not enough of the spastic indulgence of the modern California scene, or the strong songwriting out of Poland. In fact, Monstrosity's fourth album is just another pointer on how the mighty have fallen, how the Florida titans and their hangers-on had been diminishing in value for some time, unable to match the pinnacles of novelty and achievement that marked the late 80s and early 90s. Rise to Power is no slouch, and a few of the tunes provide 'in the moment' excitement, like "A Casket for the Soul" or "Abysmal Gods", but even these peter out into insignificance as solid riffs are backed by trackless filler, writhing grooves betrayed by vapid blast-offs. There's some variation to be had, but not much value.