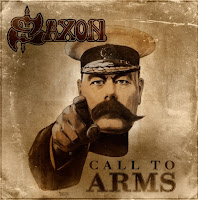 If you had told me 20 years ago that Saxon would still be alive and well in the 21st century, releasing viable and even extraordinary albums, I doubt I would have believed you. Apart from Motörhead, they are perhaps the one long-term NWOBHM act who not only persist, but actively challenge themselves and come out fighting with records arguably as strong as their classics. Whilst Iron Maiden and Judas Priest are pushing up daisies, sating their audiences on brand names alone and diminishing songwriting capacity, Biff Byford and his troops have forged on with great records like Unleash the Beast, The Inner Sanctum, Lionheart and Into the Labyrinth.

Granted, some purists who fancy only the most blue-collar roots of the band on classics like "Wheels of Steel" or "Power and the Glory" might feel turned off at the modern studio climate and surges of power metal aggression the band espouse in recent years, but a little variation does nothing to dull the band's inspirational, incessant devotion to quality. Call to Arms, their 19th full-length, delivers on all fronts, a blend of classic NWOBHM/hard rock tracks and faster paced material for the younger audience. "Hammer of the Gods", "Afterburner" and "Surviving the Odds" all offer the savage nigh-on speed metal that dwells upon their threshold of aggression, replete with soaring choruses, Byford stretching his elder lungs to the max.

Meanwhile, those interested in the band's 80s, power ballad-to-balls fare will be thrilled with "Mists of Avalon" and "No Rest for the Wicked" which hearken back to Rock the Nations, Destiny and other examples of their work in the genre's Golden decade; and if it's the more 'epic' Saxon you seek (circa Metalhead, Into the Labyrinth, Killing Ground) then you've got "When Doomsday Comes". There are few if any missteps. "Ballad of the Working Man" has a decent swagger and melody line to it, but otherwise moves to the rear of the pack; while the big rock of "Back in 79", in which the band recruited a pile of fans to provide the later backing chorus, is not that great a tune outside of its cute gimmick...

The production sounds superb as it has for the past seven records, and the streak of memorable songwriting continues, even if the album isn't wholly consistent. Saxon proudly joins the ranks of Accept and Anvil in bringing the inspiration to yet another decade, this one ridden with old school heavy metal wannabes that are being proven redundant by the originators! Call to Arms is not the monolith of quality that Unleash the Beast and The Inner Sanctum both proved to be, but it thrusts a wrench to the jawbone of irrelevancy, and time itself is going to have to work a lot harder to steer these old dogs off the scent.