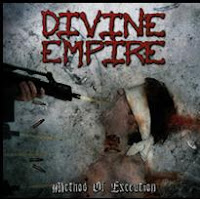 As much as I might mourn the plebeian and boring cover art of a hostage being blindfolded and gunned through the mouth, I have to admit that Divine Empire have improved upon the brute and urban aesthetics of their prior effort Nostradamus here. I really don't see why bands in this genre would abandon their imaginative and frightening imagery for such mediocrity (take a look at Doomed to Inherit or Redemption and then compare), but in this case the plain and violent portrayal is pretty well suited to the lyrical themes coursing through the album. Method of Execution is just as street tough and thuggish as its predecessor, an urban Morbid Angel, but Divine Empire have done well to improve the songwriting and offer a level of variation yet unheard from their minds.

As far as its production, Method of Execution is close to Nostradamus. Thick and knotted, meat hammer pummeling grooves are splices with faster paced, technical aggression. But there is a clear swerve towards both a more thrashing territory in several of the central riffs, and also a more overt use of atmospheric techniques that make the album feel very well rounded. There are 16 tracks here, a substantial amount when just 10 or 12 might have sufficed, and thus a few cannot match the delivery of the best, but in all there are plenty of hooks to keep one on board. I was shocked by how great the intro to "Vowed Revenge" was, and then the great textures of the riffs and the surprise of the orchestral swells in the background, not to mention the bass lines coursing through the forceful chugging, but not all of the songs live up to this promise. "Terror Zone", "Dungeon Mask" and "The Mauler" all kick some ass under this versatile context, and a few happy mediums between Morbid Angel and Pestilence ("Impervious Deception" and "Sanctionized Homicide", but the rest fall slightly behind.

Still, Blachowicz and Soares have clearly benefited from having a stable lineup two records in a row (drummer Timlin remained on board), and no matter what the song here, they seem to find some way to convey tension and intrigue through the dense mix, busy battering and outbreaks of beefy death/thrash. The instrumentals are fairly interesting, though not necessary, like the closer "Reduced to Ashes" and its mix of bluesy rock and voluptuous chugging. In the end, I think I'd have to qualify Method of Execution as Divine Empire's finest hour. It might not have the same punishing precision as the debut Redemption, but it provides a curious alternative to Hate Eternal or Morbid Angel from a more brutish, street tough perspective, battling not the Elder Gods and occult endgame scenarios, but the political and social atrocities of its day. Not nearly a masterpiece, yet a pretty promising start for the trio as they moved to Century Media records, so I'm wondering where the followup is!? I'm certainly ready to listen.