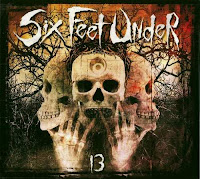 I could accuse Six Feet Under of many things, but certainly a lack of productivity is not among them. The middle of the 'oughts saw the band at a pretty hectic nexus in their career. Riding high on the heels of their pathetic AC/DC Back in Black tribute Graveyard Classics 2, they were soon to return to the studio for their sixth original full length 13, while the band were prepping 'the big one', their Decade in the Grave collection due on Halloween of the same year. Now, 13 is not a sudden leap in quality above the recent drivel like Bringer of Blood (2o03) or True Carnage (2001), and the production in general is quite limp compared to Bringer, but there's an astute seriousness, a workmanlike ethic that Barnes and the boys have brought for this that involves far less fucking around than the past handful of releases.

That's not to say 13 is a mark of quality, in fact, quite the opposite, but the album is nowhere near as insulting and pathetic as its recent siblings had been. The guitar riffs still leave a lot to be desired, even if the band had largely returned to their Obituary-defined roots circa Haunted or Warpath. The quartet is all business as they break out "Decomposition of the Human Race" or "The Art of Headhunting", and there are quite a few straight thrashing/groove tunes here like "Somewhere in the Darkness" and "Shadow of the Reaper" that almost succeed in constructive passable guitar lines and fist fighting momentum. Alas, there is still much work to be done, because a number of the songs still suck pretty hard ("The Poison Hand", "Deathklaat") due to the minimal effort in their composition, and the lyrics range from total suck ("Somewhere in the Darkness") to tolerable horror film tributes (title track).

For the first time in a long time, though, I can at least rest knowing that I didn't enjoy a Six Feet Under record because it was merely weak, rather than actively odorous and offensive to the point of disbelief. 13 does not belong among the band's 'stronger' works, that is the records that aren't utter and total failures (Haunted, Maximum Violence, Death Rituals), but then I never wanted to hurl it against the nearest hard surface and break it. It doesn't necessarily belong in the refuse pile alongside Warpath or True Carnage. Hell, with a few tweaks, a little subtlety, and less lazy riff writing, Six Feet Under might damn well pursue the 'comeback trail', or better yet, write their first 'good' album. I'm sure no one is crossing their fingers, but wouldn't that be a surprise? After all, it had been over a decade since The Bleeding, Chris. Pony up time?