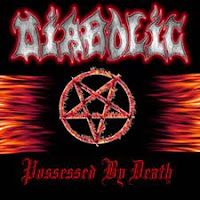 Somewhere between the years of 2003 and 2006, Diabolic had undergone a legal dispute over the band's name which was reflected in the shifting of its lineup. Several of the members, including Aantar Lee Coates, had gone off to form a new project in Blastmasters, while being replaced for the band's 2003 full-length Infinity Through Purification, and there was obviously some sort of disconnect, or unrest within the ranks. Thus, it's a bit of a surprise that the next Diabolic recording would feature an entirely different lineup than the third album, Coates obviously winning the moniker and then recruiting a few of his Blastmaster cohorts into the fold, along with Pessimist shredder Kelly Mclauchlin.

Finding themselves without a label, Diabolic recorded this EP material to shop around for interest and offer a free download to their remaining fanbase, a wise and low cost maneuver rather than going for broke on an entire new full-length. It doesn't look like much, but what do you expect for free? Stylistically, there's no cause for concern, as Possessed by Death maintains the same relative pace and aggression of prior efforts like Vengeance Ascending and Subterraneal Magnitude, fusing the Deicide and Morbid Angel influence into fits of appropriate blasted mayhem, churning rhythms and whacked out, atmospheric leads. The new vocalist Jesse Jolly has a comparable, blunt approach to Paul Oullette's: David Vincent's depth and Glen Benton's layered snarling in lockstep, but not necessarily very interesting.

The EP is book-ended by a pair of brief, unhinged guitar instrumentals, of which "Chronology" is the more interesting with its cheesy, almost martial keys, and then its core is comprised of three metal tracks, which blow past the listener with the same monotonous fire as much of the Vengeance Ascending material. However, I will point out that the lead sequences are quite nice in "Possessed by Death" and "Devour the Subconscious", plenty of thought instilled in their pallid eruptions against the incessant, background battery. All told though, there is not a lot of meat on this content. The production is consistent, the drums intense, and the riffs functional, but there is little of the ominous architecture that made Subterraneal Magnitude a pleasure to experience. I should point out to the prospective buyer that this was re-released alongside their following EP Chaos in Hell in 2008, through Deathgasm Records, so that's a preferable option for the purse. But either way, this isn't anything you've not heard in the past and better from the better known Florida acts, and not even up to par with the firs two Diabolic outings.