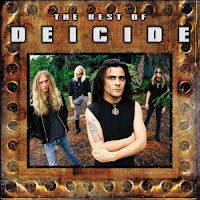 About 2003, Roadrunner Records got the bright idea to release a series of wholly irrelevant compilation albums dubbed the 'Roots of' series, exhuming the corpses of their early 90s death metal vanguard to release them, re-arranged and poorly packaged upon the biggest suckers available. Rather than, you know, signing some NEW acts in the genre, and helping maintain its freshness and visibility (not to mention the now nu-metal label's integrity), they decided to flex the muscles of their CD printing press and distributors and foist yet another of these bargain bin-choking pieces of shit. It's the 'best of' Deicide, as selected by US, your robot overlords! Please consume this at your earliest discretion when attaining the latest albums from Slipknot and Machine Head. Have a nice day.

Essentially, The Best of Deicide is your chance to own 64 minutes of repressed material spanning much of the band's career (excepting their most recent album, In Torment In Hell). There are 20 tracks, so if this were say a free sampler being given out at gigs or through a magazine, it might count as a 'substantial' glimpse of the band's progression and regression throughout the years, to any nub into or just getting into brutal or old school death metal. Frankly, though, we could just listen to the Deicide (1990), Legion (1992) and Once Upon the Cross (1995) material and be done with this, since it trumps just about everything else found here, but even then I couldn't recommend a release such as this. There's something about listening to an album in its original form that gives the ardent listener a sense of completeness and perspective that is vastly superior to experiencing a highlight reel. You get the artwork, the packaging, the sequential creativity as the band had originally intended (well, most of the time), a crop of tunes written within the same general time frame, whether killer or filler.

Such things are taken out of context with The Best of Deicide. Even at the best of times, death metal is a niche market. There are no 'greatest hits' in the genre. This is not Billy Joel or Bryan Adams we're listening to. Sure, we all have our favorite individual tracks, even from a band of brutes like Glen Benton and company, but there is no impetus to experience them like this. By 2003, just about everyone not in a third world country was capable of burning his/her own mix CDs out of the Deicide albums he/she already possessed. Why not do that instead? Share them with a friend. Share them with your local preacher. Do not hand over money to Roadrunner for such a needless exercise in capitalism, when you could hand over the money for a good studio album (from this band, or any other in the field). The Best of Deicide is like going through a fast foot restaurant drive thru and handing over money for a meal you already ate and paid for. Don't be taken, because it only encourages them to keep dangling their dicks into your wallet.