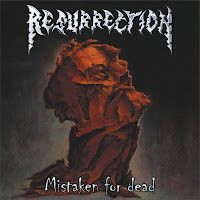 15 years is a long time to wait between albums, so it's to the credit of Florida's Resurrection that they managed to stage a comeback that not only kept loyal to their 1993 debut Embalmed Existence, but actually built upon that, with a more technical thrash/death riffing style that engages the listener even when those particular riffs are not the most memorable. That's not to say I appreciate this above its predecessor, because I honestly enjoyed the dark and derivative atmosphere found there, but its good enough to hold the attention, and superior to some of the output from scene veterans that spent all those intermittent years touring and releasing full-lengths. Add a crisp, modern mix, dynamic guitar range and Paul Degloyer's vicious snarling, and you've got a passable sophomore.

Those who found themselves turned off by the corny, narrative bits between the songs on the debut might find relief with Mistaken for Dead. No, they haven't forgotten them, but they adorn only about 4-5 of the songs, and are kept brief and manageable. Almost as if to evoke nostalgia but retain cognizance that it was a silly idea to begin with. Much of the excitement of the album is front-loaded in the first few songs, like the frenzied, melodic spikes woven into "Coward" or the brick house violence of "Buried Alive" (which reminded me of Malevolent Creation). A few of the tracks further in ("Perils of Burden", "The Deceiver") also hold up pretty well, but beyond that I felt not necessarily that the quality trailed off, but that the later tracks felt too similar to those on the first half of the album. Granted, this was never one of the more promising Florida death squads to begin with, but a little more consistency, atmosphere or versatility would not have hurt this at all.

Instead, it just feels like a workmanlike, socially conscious successor with a lot of thrashing and slamming sequences that often reminded me of Kreator in their late 80s period up through the mighty Coma of Souls, at least the means by which the melodies are incorporated into the palm mute sequences. The guitars are certainly more intricately crafted than the debut. The rhythm section is up to snuff, and Degloyer definitely makes his presence known with an angry rasp that comes off like a more ripping Chuck Schuldiner or less vomited John Tardy. Nothing too impressive or trail blazing, but across a gulf of 15 years, they could have devolved into something far less appealing. Also, this must be one of Dan Seagrave's worst cover arts. All in all, though, Mistaken for Dead is probably worth a listen if you recall Enbalmed Existence, or if you're into the urban aggression of the first few Malevolent Creation records.