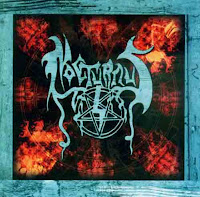 For a band that had initially manifest in such a storm of darkness, sparks and wonder as The Key, Nocturnus has sure gone limp throughout the remainder of their career, which at this point has borne the semblance of a shuddering light bulb suspended from the ceiling of some damp and forgotten basement. Their subsequent albums Thresholds and Eternal Tomb were decent, but really failed to expand the vision and momentum of that timeless debut, as if they were simply churning out the same repeated ideas like a taffy maker. Too many trips back to the well before the rain of inspiration, and the supply becomes rank and unpleasant to the taste.

Not too much of a surprise then, that in its death throes, the cult classic metal act is celebrated by a re-issue of demos, or previously unreleased fare that can turn someone a buck where said band's lack of productivity and creative shelf life are not sufficing. Enter The Nocturnus Demos, a repressing of the band's s/t Nocturnus demo (1987) and The Science of Horror (1988) which unfortunately doesn't have a hell of a lot to offer anyone familiar with The Key. Well, to be fair, the '87 demo has a handful of tracks that were abandoned to the past, but "B.C./A.D.", "Standing in Blood", "Undead Journey" and "Neolithic" are all meager representations of what they'd become on the superior, full-length journey, and "B.C./A.D." is presented here in two versions. Perhaps the most impressive aspect of this fan package is hearing just how brutal the band was for the late 80s period, and in this was I was reminded of Deicide's collection Amon: Feasting the Beast. Otherwise, expect crude tape productions and Browning vocals that feel disheveled and shouted compared to the brute professionalism he displayed on The Key.

As for the stuff you hadn't heard, there's the messy namesake "Nocturnus" which filters a few half-decent riffs through a garbage song structure; the brooding slog of "Unholy Fury" which bears some similarity to Hellhammer with speed breaks; or the blackish, brackish waters of "The Entity", with some wildly woven leads and sadly forgettable rhythm riffs. All of these hail from the band's '87 demo, granted, so less polish is to be expected, but as the sole 'attraction' to this compilation that cannot be experienced outside of The Key, they come up very short. Had The Nocturnus Demos featured superior production (which I must admit, Amon: Feasting the Beast did in places), or some later odds & ends like the s/t EP from 1993, then its value would be greater, but really there's just no point to listening to this outside of base curiosity. A pity when there were (and remain) so many outer and inner spaces that this band had yet to explore.