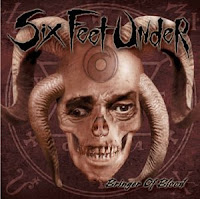 Perhaps I've just been looking at Six Feet Under in the wrong light. Maybe this band was actually birthed as a comedy troupe, a more subversive and brutal alternative to a Tenacious D or Weird Al Yankowic. Maybe Chris Barnes and crew are laughing all the way to their next paycheck, each time they release one of these stolid and mentally handicapped emissions unto the world. A googly eyed skull stares in separate directions while its head is adorned with goathorns and other floppy things that make it look like an undead jester. The 'Play' button reveals nothing more than awkwardly conceived vocals between blunt and snarled poles. Bad death metal grooves that were frankly not fit for most of the half-assed groove and nu-metal bands in the mid to late 90s. Pedestrian lyrics that exhibit not even the most frivolous trace of effort. Welcome once more to Six Feet Under. This is all a joke, right?

Perhaps the most criminal irony about Bringer of Blood is that the mix of the album sounds so much fresher and bloodier than all of its predecessors. They were truly able to extract a gut wrenching power from the guitars this time around, and Barnes' deeper vocals are better pronounced and less like a sad gorilla that had its zoo toys taken away from it. But the songs themselves are largely more of the same, pathetic and embarrassing fare that would not take the canny musician even a brief instant to compose. For example, "Sick in the Head" is naught more than generic grooves and chugging rhythms that for some reason have not put Steve Swanson to sleep, slathered in annoying grunts and rasps and a chorus break that sounds like Barnes is channeling Mr. Ed into his gutturals! And then then next song is dubbed "Amerika the Brutal" and sounds like a mix of GWAR! and The Offspring, with 6FU vox. I am not making this up. How the hell do I persist and not turn this slop off?

You'd think it could not get any worse, but then in the very NEXT song ("My Hatred") Barnes starts grunting 'Hell yeah, hell yeah, what the fuck you gonna do' in what might be the lamest and weakest indictment of Christianity ever penned in extreme metal. A few of the middle pieces like "Murdered in the Basement" and "When Skin Turns Blue" take a turn for the better, but really they're nothing more than the same puerile post-Obituary grooving mosh anthems that this band had been releasing for years already. Ditto for "Escape from the Grave". In the end, I wish I could send a sympathy card to whoever wasted his time making such drivel sound so coiled and powerful, but I won't, since Chris Barnes produced it and even had a hand in the mix. Bringer of Blood is just another miserable toilet splash in the sad, sodden output of Six Feet Under.