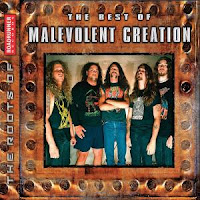 As if The Best of Deicide was not enough of a perverse molestation of the Floridian death devotee, Roadrunner also put together a similar piece of plastic refuse for Malevolent Creation, who had been off the label for nearly a decade by its release. So, yes, that means the collection covers only their 1991-1993 period. Which is to say, two good albums (The Ten Commandments, Retribution), and then this other thing called Stillborn. Admittedly, this does feel more like a 'Roots of' collection as the sideline insists, since you're only getting the formative pieces of Phil Fasciana's puzzle, but once again I am prompted to remind the reader that this label had long since fucked and abandoned Malevolent Creation, and long since since turned out real DEATH METAL.

Face it, if your music was not selling like hotcakes (*crickets*), or not selling hotcakes but perpetuating off your band's name (Deicide), or not shifting gears fully into hardcore, groove (Obituary) and nu-metal (Sepultura) territory, you were no longer a part of Roadrunner's scheme; Malevolent Creation, who were never exactly one of the forerunners in the Florida scene despite their efforts and geographical placement, had not been part of the equation for quite some time. Their album sales were not up to muster and the band didn't review well. But in some sentimental twist, they now wanted to sell the audience (presumably the fans of Fasciana's firing squad) shit we already owned? Bollocks!

The length of the Best of Malevolent Creation is comparable to that of the Deicide release, with 18 tracks and 63 minutes of content, not presented in chronological order but with the tracks scattered fairly evenly across the Roadrunner releases (6x The Ten Commandments, 6x Retribution, and 4x Stillborn), and then there are two 'unreleased' tracks. But wait, they're NOT unreleased. The forgettable cover of Slayer's "Piece by Piece" had been released on the 2nd At Death's Door label compilation, and the demo version of "Genetic Affliction" (Stillborn) made it out through the miserable Joe Black compilation on Pavement. So rest assured, this is lock, stock and two smoking barrels: 100% bullshit. Not even of value to collectors.

If you've never heard this longstanding Florida outlet, then make a beeline straight for the first two records, also through Roadrunner, and offer your hard earned currency that way. Or buy a few copies from the band directly at a gig. They're the best Malevolent Creation has ever recorded, even if not the most brutal, and listening to either will provide a more fierce, fulfilling experience than The Best of Malevolent Creation, a shiny beer coaster haunting the bulldozed excess of an indifferent wasteland.