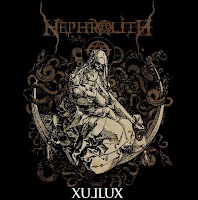 Nephrolith is a relatively new black metal outfit out of Slovenia, forming a few years back and producing a demo (Vinsketh) in 2009 that led to this full-length recording. I haven't been exposed to a large number of other bands in this scene and style, but Xullux reveals a rather mature, melodic aesthetic rooted in both the dark spirituality of the band members and the more somber sounds of Swedish or Finnish black and death influence from the late 90s. I hear a little bit of Dissection in the sound, as I might for anything so inherently focused on its blissful, glorious guitar work, but the compositions are dissimilar enough that the album breathes some distinction. This places them in a rather different light than some of their local peers like Bleeding Fist or Torka who pursue a more raw, diabolic edge to their material.

The strengths of Xullux come through its natural, sincere tones and the interspersion of lighter, medieval acoustic segues through the more weighted metal tracks. "Intermezzo" and "Omega" are quite nice on their own, but it's occasionally used within one of the longer passes, like the intro to "Abandoned Essence Part I". The electric guitar sound is bold and rich throughout the album, yet the thick bass lines and driving drums are never smothered. Vocalist Nerthag hovers just above the mourning miasma with a pitch not nearly so raspy as many in the genre, fuller bodied but still pronounced and tormented, sparsely reinforced with a deeper growling. The tracks feel well enough written, not averse to some degree of intricacy, and in general woven from some fairly memorable riffs ("Spiritual Departure", "The Tale of the Conquering Dusk"). Drummer Natvyr has a clear capacity to blast and thunder his double-bass pedal where needed, yet he shows and admirable restraint better suited to this music.

This is, in general, a pleasant listening experience. If Nephrolith falter anywhere, it's that they lack the raw intensity of many other acts in the field. Tempo-wise, Xullux is comparable to the lion's share of classic black metal (or melodic death) recordings of the mid to late 90s, subsisting on competent rhythmic variation, but even when they're striking their hardest (as in the bowels of "Spiritual Departure" or "Abandoned Essence Part I") they do come off somewhat more subdued than many might desire out of their black metal. That said, I admit that I never found myself disengaged or disinterested with this debut. The quality is pretty consistent throughout, and even though I might not have unearthed some dark revelation through the material as I often do within this genre, the guitars and rhythmic skeleton of the album do keep the ears at a steady attention. If you can appreciate overt melody and sullen majesty above (or in place of) caustic, scathing grimness, then Nephrolith should not be ignored.