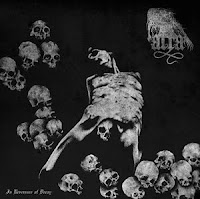 Few things could seem so desolate as a skeletal matron delivering a skull through her birth canal, and just such an image represents the cover of Atra's second full-length effort, In Reverence of Decay. The Australian one-man (Blackheart) outfit had a cold and murderous work on his hand with last year's Death Coven, and its successor more or less returns to the same chagrin precipice of traditional black metal aesthetics wrought through depressing, subdued melodies and the ineffable shadows of oblivion. There was a particular, wintry layer to the debut that I found lacking in this material, as if Blackheart had exchanged that frigid season for the festering decay of an abandoned sepulcher, but the style of composition itself is not a huge departure.

Throaty, spectral vocals are cut above a broth of salient, heavily processed distortion while the drums maintain a substrate of hammering simplicity. Often Blackheart will measure off a more driving, quick picked guitar across a crashing, thrashing undercurrent, but on the whole the patterns are one-track in their oppression. For most of the track list, the writing is admittedly rather predictable, a mix of mid to faster paced tradition with segues of ghastly significance at a more somber plod ("Upon the Throne of Shadows and Doom", the latter half of "Majestic Evil"). But often some subtle, defined twist of melody will manifest to reward the listener for braving the album's murky depths ("Phantasms of Silence and Dying", "The Souls of the Arcane Dance"). Blackheart has also included a pair of frightening ambient bookends that round out the album rather well, the tormented swell of intro "Of Mysteries Ancient" and the closing, acidic radiance of "Vox Vermes".

All told, In Reverence of Decay is not quite the measure of Death Coven. That album had some choice moments in which I felt like giving up my steaming blood to the snows, while this one more or less broods for about 36 minutes and throws you the occasional chill. Effective enough to turn any smile into a frown, but not quite ready to stand slit-wrist to slit-wrist with the more ominous offerings in the genre. As well written as a lot of the underground material out there, but never quite distinguishing itself. Those who enjoy the comparable sounds of Striborg, Moon and Drowning the Light or dank/depressive black metal would do well to at least check this out, but I can't imagine myself reaching for this over the Atra debut.