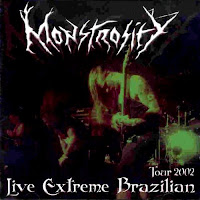 It seems somewhat suspect that Monstrosity would release a live album so soon after their Enslaving the Masses compilation (2001). Was there really a huge demand for such material? Disc 2 of that collection left something to be desired (rather unfairly mixed), but it at least gave a general impression of how the band were experienced on stage. Having seen them, I can attest that they're decent, thus a better sounding live offering might not be unwelcome, but that, my friends, is not Live Extreme Brazilian Tour 2002, not by a long shot. This was released through a small label known as Mutilation, and features a pretty piss poor recording of a handful of Monstrosity tracks that the band were performing in South America.

Seriously, one has to strain to attain any subtleties in the performance. Lee Harrison's drums are strong enough, or at least, mechanical sounding and precise, but the guitar chugging, and that's all you will hear: the chugging, is quite weak. I've heard jam room recordings stronger than this, recorded to single track tape machines. The vocals sound fairly generic, and the bass exists only as a pumping subtext to the monotony of the guitars. The one guitar thing doesn't work out quite so well when the rhythm has to drop for the leads (they've often had two though). Now, it's quite likely that this was in fact a great, exciting set being performed, but that the capture simply wasn't very good. The set here is rather short, about a half hour and eight tracks, two of which are Slayer covers ("Angel of Death" and "Raining Blood", about as generic as you could get, though Monstrosity do decent renditions on principle).

As for their original offerings, you get three from the Corpsegrinder fronted albums Imperial Doom (the title track, "Final Cremation") and Millenium ("Fatal Millenium"); the rest are all from their most recent, In Dark Purity ("Destroying Divinity", "Dust to Dust", and "The Angel Venom"). Not a terrible selection for so brief a set, but nevertheless underwhelming if you were to compare it to any of the more substantial alternatives you could purchase. Perhaps if they'd placed a few separate, complete sets here across 2-3 discs, with some variation in the track lists, then it would be a better bargain, but if the sound were this mediocre in general then that would become even more of a drag. Even if Live Extreme Brazilian Tour 2002 is not an official bootleg, it should be treated as such, because that's what it sounds like, and the limited pressing of this is really no impetus to check it out unless you're the most financially liberal collectors.