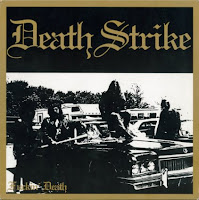 If ever there were an album deserving of a re-issue, Fuckin' Death would be a prime contender, and so it is that Death Strike's long beloved, trashy visage once more circulates among the legions of young and old that starve for the authentic sounds of the 80s. While the original Nuclear Blast version of the album was released in '91, half of the contents were lifted from the band's 1985 demo of the same name. Death Strike is perhaps best known as being the launching ground for the prolific Paul Speckmann's long love affair within the extreme metal spectrum; not so celebrated as the better known Master, but far cruder, and arguably more important.

You see, Fuckin' Death came about during those early years when the thrash and crossover sounds were simply no longer violent enough, and bands sought to push the edge into the next category of grime and misanthropy: death metal. One might disagree that Death Strike truly qualified as a straight 'death metal' act, and in truth, the music itself bears more in common with the fast, raw, thrashing of the time, but the vocals hold it upon the precipice. In this way, the band was quite similar to Possessed, Venom or Bathory, an amalgamation of desolation and disgust which functions fully on its slovenly, violent schematics. The riffs are raw, churning, and don't sound like they took more than a few moments to conceive, while Speckmann's brute and masochistic vocals resonate across the mix, choked with carnivorous, serial killer charisma.

In short, it's not perfect, but it's bad ass. The riffs to "Mangled Dehumanization" and "Pay to Die" might mingle with the stark simplicity of a Discharge or Repulsion, but they're all in good fun, and remain fresh and inviting despite the crass, raw meat of the production. Leads are hardly structured, they simply wail out through the burgeoning, crashing momentum. The newer songs like "Pervert" and "The Final Conflict" (with its acoustic intro) seem as if the band were trying to expand themselves structurally, with a deeper production and slightly more restrained vocals, and I can't say I appreciate them as much as the original Fuckin' Death demo material. But they are in no way bad, and as a bonus, this new edition of the album includes four rehearsal cuts ("Live for Free", "Pay to Die", "The Truth" and "Master") which help round out the experience and should thrill longtime fans of the demo.

We're not talking strict immortality here, and there are pretty obvious reasons why these songs would not have made a similar impact to other US pioneers like Slayer, Possessed or Dark Angel, but Fuckin' Death is still a cult collectible. The lyrics are decent for the time, the viral uncircumsized guitar tone and crashing vocals make it the equal of most of the later Master records. Worth hearing for at least the original demo at its heart, and now that you've got a chance to acquire it on readily available vinyl or CD, it makes for an entertaining, shattered window into the past of one of metal's long unsung figures.