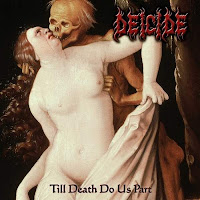 Deicide's Till Death Do Us Part may just be the band's most divisive album, for it travels in two directions at once. The first, towards a previously unreached level of musicality in the instrumental book ends and lead sequences. The latter, straight down memory lane, because some of its more brutal elements are downright generic and predictable as nearly anything the band were writing during their lamentable 1997-2004 stretch. Thankfully, the massive production values from the previous album remain, so even its drab moments deliver at least a cursory thumping, but in all I can't say that it reached the level of The Stench of Redemption, though it doesn't quite deserve the heaps of negativity some listeners have thrust upon it.

I absolutely loved the intro and outro pieces, titled in opposition: "The Beginning of the End", and "The End of Beginning". But they were like listening to a whole other band performing melodic, progressive sludge or doom rock, or a less jangly, more accessible take on Gorguts' Obscura, Ralph Santolla's exotic leads slicing out over the fields of slowly driving discord and discontent. But one should not be fooled into think that the entire album will reek of such experimentation, because most of the tracks are simply back to the butcher business, from the hammering speed of "Severed Ties", "In the Eyes of God" and "Angel of Agony" to the slower, diabolic old school gait of "Not as Long as We Both Shall Live". That last one deserves a special mention, because despite the fairly pedestrian riffing that it opens with, the atmospheres developed in the bridge and through the leads are simply marvelous, returning to that risk and breadth of the intro and outro pieces. Then there are a few half-on, half-off tunes like "Horror in the Halls of Stone" and the title tracks that have a handful of inspiration riffs wedged in between their filler arcs.

The production is strong, especially the almost mechanical, maniacal precision of Asheim's bass pedals and the clarity of the guitar mutes. As for Benton himself, I found his vocals rhythmically less satisfying than The Stench of Redemption. He follows the beat and guitar line a bit too closely and uses less of the layering snarls that were his trademark, going more for the tone that he used for the Vital Remains records he fronted. Acceptably brutal, just not that inspiring. Jack Owen and Ralph Santolla continue to deliver as expected, and I enjoy the latter's leads more so than just about any executed during the Hoffmanns' stint in the band. In fact, I think the means by which the solos are incorporated into the writing here is nothing but a positive. The real detriment to Till Death Do Us Part is simply that the central death riffs do not live up to the promise of their more eloquent surroundings.