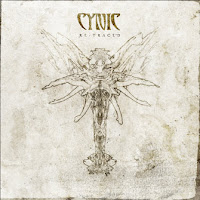 I might be in the minority of Cynic listeners who actually found Traced in Air to be a superior effort than the band's intricate debut experimentation (Focus), but the difference in quality was only a pinpoint margin. There were myriad complaints of the band's newer direction, which was admittedly far less metallic than their 1993, and not nearly as explosive, but I think anyone expecting the Floridian fusionauts to write a repeat performance after 16 years might damn well border on delusional. Yes, they were going to change, massively. Just look at anything the members were involved in throughout the gulf, and wonder how Traced in Air managed even the slightest traces of familiarity after such a disjointed history.

For the ensuing Re-Traced EP, Cynic have gone even further into the introspective terrain they plotted out with the 2009 full-length. Do not expect much in the way of new material, though, for four of its five tracks are mere re-interpretations from that album, and wimpier versions at that. Seriously, Cynic have gotten so tranquil here, so arguably 'emo' here that one wonders why they don't just change the band name and have a go at mainstream radio. I'm all for exploration and experimentation, mind ye, but this is just a taming of the shrew, a softening of the core. Next to this, Traced By Air is positively storming. They've even taken the minimalism and watering down to the song titles, so "Space" is an electro lite retread of "The Space for This", "Integral" an acoustic/organ translation of "Integral Birth", "Evolutionary" an indie rock doppelganger for "Evolutionary Sleeper", and so forth.

Sadly, these alternate takes, while flexing the band's 'sensitive side', are nowhere near as compelling as their full-length counterparts. The clean vocals sound too wimpy in this context, wimpier even than any of Anathema's diversions from their roots. The one newer track, "Wheels Within Wheels" is superior due to its novelty and denser use of bass and overall instrumentation, but it too seems like a Pitchfork indie pick of the week. I've no aversion to Cynic writing a softer track, but these are all too forgettable. Hopefully, this is just for kicks and the band won't be pursuing such impaired avenues in the future. I can't imagine who would want to listen to this, it makes Death Cab for Cutie sound brutal.