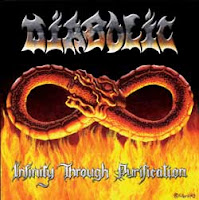 A couple years after the debacle that would have Diabolic releasing two albums within weeks of one another (the strong sophomore Subterraneal Magnitude and the monotonous blast fest Vengeance Ascending), things appeared to be in order once again. Thus, their second album through Olympic, Infinity Through Purification feels a little less rushed in retrospect, a bit more balanced. Really though, after Vengeance Ascending, just about any degree of variation would have served, and though this is not Diabolic's best CD, it certainly cannot be accused of the same exhausted momentum of its direct predecessor. Much closer to Subterraneal in scope, with a lot of huge, swerving grooves interspersed by maniacal bursts of Morbid Angel worship, Infinity lies between them in overall quality.

Some of the guitar work here, for example, is stunning, like the tearing weave of melodies that initializes "From the Astral Plane...Entwined with Infinity", or the transcendent, atmospheric leads in "Spiritual Transition". But these are leveled off with rampant blast work and vapid streams of chords that establish little more than a comparative level of brutality to their peers Malevolent Creation, Hate Eternal and of course Morbid Angel. You'll have the distinct impression that you've had your head torn off and then punted down the nearest street, but it often becomes difficult to remember just who by? A few of the tracks like "Exsanguinated Life" or "Satanic Barbarism" almost trip over themselves in their forceful clamor, but leave behind very little memorable riffing of note, and because of this, the leads often stand forth far more than they justly should, because they provide the few moments of inarguable intrigue.

As usual the drums (performed here by Gaël Barthelemy, who would briefly replace Aantar Coates) are a tireless engine of hostility, but the velocity at which a percentage of the rhythms are performed leaves little room for breathing. If a double bass/blast beat storm is what you're looking for, then Infinity Through Purification would likely appease you, but too little of the writing transcends that particular threshold. The production is clean and reactive to the intense traffic of the drums and guitars. The vocals just kind of blather along like a mix of Steve Tucker and Glen Benton's lows, never really establishing distinction through malevolent tone or lyrical patterns. Dynamically, this isn't suffering necessarily from the same one track mind as the prior album, but neither is it exceedingly well structured or memorable. A few madness spun leads and guitar sequences outstanding, the rest degraded to the same mindless raving that renders much of the work of Divine Empire or Malevolent Creation ineffective.