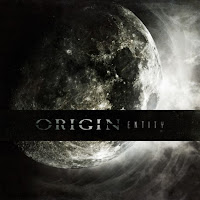 Whilst I've followed the band since their s/t debut at the turn of the century, it's taken me some time to come up to speed with one of Origin's albums. I had long considered the band to be borne more of finesse than songwriting, reliant on their boundary-kissing speed and technical precision more than memorable compositions. Riffs were falling into place on the albums, evoking admiration among the speed and brutality-starved, but the riffs were not falling into place upon my consciousness. This all changed with 2008's Antithesis, the first of Origin's full-lengths that I can honestly admit to enjoying, with a stronger subtext in the atmosphere and guitars that managed their clinical acceleration into digestible and admirable rhythms.

Well, the successor Entity has at last arrived, painting crushing and dynamic scopes across the cosmic and internal spans of the Kansas band's lyrical concepts, and you can be sure as shit that all of the band's considerable technical components are in place. Arpeggios and noodling all over the place, balanced off against the velocity of John Longstreth's near mechanical drumming skills, the percussive rhythm guitars which often verve into exotic, Middle Eastern notation, and the simultaneously Deicide-styled guttural and rasped vocals. But I found that it took some time for the album to pick up. The showy "Expulsion of Fury" is not more than wailing indulgence that cedes into a forgettable if frenzied palm mute chugging sequence, and there isn't really a single tune that caught my imagination or memory until the brief acoustic sequence "The Descent".

At that point, or rather at the eighth track "Committed", the album takes a turn for the better, with its slicing and pummeling discordant start/stop patterns. "Banishing Illusion" has some of the best, frenetic guitar melodies that conjure an inherent atmospheric lacking on so much of the album's first half; while "Consequence of Solution" is 7+ minutes of blasted and shifting variation which can't help to beat on the conscience with at least a handful of the riffs, and the closer "Evolution of Extinction" is harried and freakish enough for the first half, with lightning fills and schizoid, punishing riffs forming the backbone. Ultimately, though, I just didn't hear much of a reason to return to this. With each successive spin, the album failed to generate any nuance or subtlety outside of the members' instrumental dominance, a trio of crack commandos firing off sniper rounds that never execute their targets. While Antithesis was no less storming, I felt the tracks there were meatier and had more to pin my ears into their vortex of exploration. This time, while as flurried and technical as ever, I felt too constrained to a vacuum of interest.