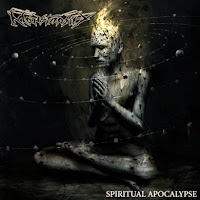 Though the two are not quite the same, I'd liken Monstrosity's 5th full-length Spiritual Apocalypse to Deicide's surprising Stench of Redemption from the year prior. Both show a heightened sensibility towards melody and songwriting that establish their acts for a new century, without abandoning the brutal throughput of their history. Spiritual Apocalypse reveals a willingness to explore and grow, while maintaining the characteristics that had to its day marked the band as one of the most potent second stringers in the Florida scene: top notch riffing and lead capabilities, dynamic Lee Harrison drumming, sleek production values, rhythmic variation and enough moments of atmosphere to carry the listener into its aggressive, otherworldly space (the last being the most impressive).

Where Rise to Power was honestly pretty lackluster, Spiritual Apocalypse excels. You won't find yourself chewing your fingernails as you wait patiently for something exciting to happen. Nearly every track is infused with some stylish lead or ear jerking rhythm guitar that remains within the listener's mind, like the subtle and escalating acrobatics of "Apostles of the Endless Night", or the percussive punctuation of guitars and drums that inaugurates "The Inhuman Race". I can't get enough of the leads in "Spiritual Apocalypse" or "Sacred Oblivion"! Mark English, the band's new guitarist as of this album, simply knocks each of them out of the park, accumulating layers of rapture and revelation that cement Spiritual Apocalypse as the most 'musical' of Monstrosity's efforts.

He's not the only fresh blood here: Mike Hrubovcak of Vile steps in to add a more reactive admixture of snarls and growls than his predecessor, the effective yet monotonous Jason Avery. All told, Monstrosity are one of those few bands that can claim to have had three frontmen of note in their ranks, but Hrubovcak manages to honor his predecessors while wonderfully fitting himself into the semi-technical landscape of Harrison, English and bassist Mike Poggione. The mix is great, flush with all the other modern tech and brute death works in the field who actually care about such a thing, and the lyrics and composition are among the best of the band's career. Less snappy or flashy than Millenium, perhaps, but more intricate than In Dark Purity or Rise to Power. If asked to choose a favorite among the band's works, I might give the slight, invisible edge to the debut Imperial Doom, since I enjoy Corpsegrinder and the older atmosphere there, but I can't shake the feeling that they'd finally written its equal. Different, but about equal, and without a doubt one of the best Florida death metal albums of the 21st century to date.