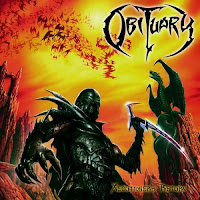 Obituary must have felt the pangs of nostalgia when putting this 7th full-length album, because not only did they break out their original moniker for the title, but they also reached straight back to where they left off with Cause of Death in 1990 and ripped out the old school, faster paced material. I've seen mixed criticism of the album through the years, some detractors insulted that the band would finally return to the roots as if it were 'selling out' to a sound that they themselves created, others praising it as the first decent thing the Florida veterans have released in well over a decade. I tend to side with the latter camp, but not because I think Xecutioner's Return is necessarily some triumph of a comeback, but because just about anything, ANYTHING would have been better than the pedestrian tripe branded Frozen in Time.

We've gone from the pathetic, phoned in riffing of that miserable pustule to something that is at least an approximation of the classic Obituary that sends shivers down the spine. Sure, the guitar tone is vintage Cause of Death being played at the speeds of Slowly We Rot, and there are treacherously few new ideas, but I'd take this in a split second over their tough guy groove metal libations of the mid to late 90s, and there are a handful of genuinely good songs here like "Lasting Presence", "Evil Ways" and "Drop Dead" which are all in a solid block near the beginning of the disc. The deeper you go into the track list, the band does seem to transform back into the vapid grooving of their last four discs, which might not be a negative if the riffs were catchy enough, but songs like the bloated "Contrast the Dead" and the dull "Lies" reek too much of disposable filler that was used to swell the play length of the album.

Also, Obituary continued to be pretty lackluster with most of the song titles and lyrics here, which can't have taken them more than a few minutes to throw together. To be fair, this was a trait present as far back as Cause of Death, but at the time the band felt so fresh with their blend of burgeoning Hellhammer guitar riffs and Tardy's atrocious awning growls that we were not, understandable, paying much attention to some of the trimmings. Xecutioner's Return might also be 'accused' of having the best (or worst) leads in the band's catalog: the best if you fancy a more melodic, memorable approach that doesn't cede the band's monstrous atmosphere, the worst if you are actively offended but anything outside of the zipping, wailing specters that graced the first few records. I rather enjoyed them, personally, because they at least offered some distinction against the band's history.

Xecutioner's Return is probably the comeback album the band should have released a few years earlier, but it does not at all abandon the distractions of the escalating 90s, and it ultimately sits at a crossroads between Cause of Death and Back from the Dead. Its got a solid Morrisound mix that really draws upon the throwback tones, but there are no songs here like "Body Bag" or "Memories Remain" that I'm going to find myself enamored with for decades. That said, it does help soothe the scarring left on me by the lazy and terrible Frozen in Time, even if its ultimately not stronger than a World Demise. There is at least an Obituary inside this album, struggling to find its way back to the rot and regret of its ominous origins.