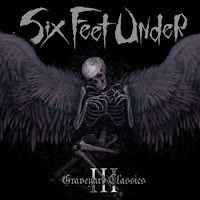 Where Graveyard Classics 2 faltered heavily in its attempt to recreate the AC/DC Back in Black album in a death & roll context, its follower returns to the formula of the first unnecessary Six Feet Under covers album: an even distribution of agony as the band numbs and butchers its way through ten metal, rock and punk classics, with a heavy emphasis on the first category. I'm not sure how Chris Barnes got another green light for this, and it certainly doesn't need to exist. However, to be fair, there is a distinct increase in enthusiasm above the first two Graveyard Classics, perhaps due to the fact that several of the choices just work better with the brute vocals, and elude the shocking impotence of their previous covers.

I'm speaking primarily of Slayer's "At Dawn They Sleep" and Metallica's "The Frayed Ends of Sanity", both of which show more effort in their tribute than I think Steve Swanson has manifest through any of the Six Feet Under original albums. The guitars actually sound decent, even inspired, and though Barnes' bludgeoning gutturals are nearly as pathetic as always, they fit better into the mesh of dark, thrashing riffs than they do above the punk or rock tracks like the Ramones' "Psychotherapy" or Van Halen's "On Fire". Hell, maybe they should next put out an album of death metal tunes that their peers wrote. Nevermind, forget I suggested it. Sadly, while the band choose some prize material in the classic metal category, like Anvil's "Metal on Metal" or Exciter's "Pounding Metal", the guitars sound once again lifeless, and the vocals corny and pedestrian at best. Swanson does a decent job with Mercyful Fate's "A Dangerous Meeting", but Barnes proves that he's no proxy for the King, even in an ironic sense.

Ultimately, this third volume is a lot easier to digest than either of its precursors, thanks to the better production and superior choice in material. The Metallica and Slayer tunes would have made for decent free downloads on their website. But as a whole, it's unlikely to appeal to anyone outside of the Six Feet Under fanbase (assuming there is one), and by no means are any of the renditions memorable. The question is, will this ever end? Can we expect a Graveyard Classics IV? A XIV? If that unfortunately turns out to be true, then I can only hope Barnes and company will stick to the heavier material, which sounds at least competent in their resin-stained hands.