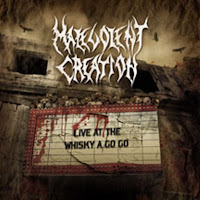 Live at the Whiskey a Go Go is the second of three Malevolent Creation live albums released through the Arctic Music Group in the 21st century (to date, anyway). One might question how a band of such second string stature might warrant such attention, but I can assure you that this disc has one thing over its predecessor, 2004's Conquering South America: Brett Hoffman. Originally, this was intended as a DVD/audio effort, which would have been a notable plus in value, but somehow the video transfer got mucked up, so it was released solely as a live audio CD, with sound quality that is admittedly short of ideal, even if its a pleasure to hear their classic front man in action.

And he sounds great, slathering and growling over a selection of newer and older tracks. I was most excited to hear him in the material from The Ten Commandments and Retribution, and these are represented in the set with "Impaled Existence", "Multiple Stab Wounds", "Eve of Apocalypse", "Slaughter of Innocence", "Coronation of Our Domain" and "Monster", a pretty healthy array of the music that matters most. There are a handful of tracks from Eternal ("Blood Brothers", "Infernal Desire"), which he didn't appear on, and then the rest are culled from The Fine Art of Murder ("Mass Graves", "Manic Demise", "To Die is At Hand", "Scorn" and the title track). Perhaps a bit heavy handed there, but it does make sense: Hoffman was just back in the band, and they wanted to highlight material he was most familiar with. The audio itself was recorded in 1999, so that was the latest studio effort at the time, and a pretty good one, with some atmosphere and stylistic variation that is balanced well with the oldies.

Unfortunately, the sound itself is just not that special. The band's performance is tight here, and the vocals grisly, but the guitars and drums feel a little washed out. The stage banter is loud and violent, and the run-ins to a few songs ("To Die Is At Hand") are quite incredibly and packed with energy to get the crowd slamming and their minds exploding, but you lose a lot of the intricacy of the guitars in the puerile thrust of the mix. Overall, it's a slightly better experience than the last live album, with Kyle Symons singing, but it's not entirely satisfying, and I honestly preferred the mix of instruments on that one. I'm all for a great Malevolent Creation soundboard session with a clarity of brutality, the classic singer, and so forth, but neither of the offerings have fully delivered it, and thus I'd recommend them only to the diehards.