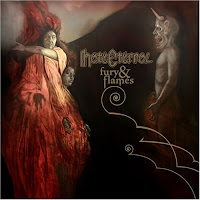 Fury & Flames is about the time I fell out of interest in Erik Rutan's workings, because it's nothing more than a retread of the grounds he had covered with the first three albums, each of which offered a functional but diminishing foray into the growing constraints of his imagination. Most of the features here are identifiable trademarks of that post-Morbid Angel. It's fast and brutal as fuck, a clamor that unfortunately, like so many of the band's peers, is often to the album's detriment. The band does toil with some versatility, as upon I, Monarch, but outside of the zippy leads and the cool outro ("Coronach"), there's painfully little that clings to the ear. A race to the end zone that is simply not engaging enough not to change the channel.

Derek Roddy was replaced by a youngster with just as much energy (Jade Simonetto), and in fact the drums are quite loud in the mix, lancing a hyperactive and resonant thunder below the stream of Rutan's powerhouse, unmemorable guitars. No worries there, but despite the excess of energy, it's not a saving grace. Randy Piro had parted with the band, and Jared Anderson sadly passed away in 2006, so Rutan brought in Alex Webster of Cannibal Corpse to handle the bass. His lines are certainly impressive from a technical standpoint, as they tend to be, and I often found the guitars so dull that I would turn to Webster to perk my interest, but its like trying to douse a bland meal of cold spaghetti with sauce well past its expiration date. The lyrics cook up that same pseudo occultism prevalent in the death metal genre, usually from the first person perspective and relevant to whatever faux rites of individualism the band is attempting to convey.

As for individual tracks, it's a bit difficult to distinguish much from the teeming, roiling mass of belligerence that populates much of the 40 minute playtime. The first 4-5 tracks tunnel past the listener at an insane pace, but outside of a few of the frenzied thrashing patterns in the midst of "When Gods May Destroy", there's nothing worth revisiting. "Proclamation of the Damned" and "The Funerary March" have some tense, tactile rhythms tucked into their battering, but they never travel anywhere interesting, and the entire album is laden in what must be the most monotonous vocal performance Rutan has yet committed to disc. It's the same shtick he'd been bellowing out since Conquering the Throne, only as time progresses, the percussive meter of the grunting has grown sour and old. The ability of the Hate Eternal musicians is never in question, because the three of them could rival anyone else in the field, but they seem to be writing the death metal equivalent of a train wreck: once it goes off the tracks, crushes a few passengers and gets cleaned up, its likely to be permanently retired.

Verdict: Indifference [6/10] (such horrors envelop us)