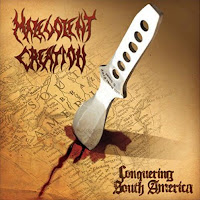 Though they'd released snippets of their live action through earlier, peripheral releases like the Live Death 4-way split (with Cancer, Suffocation and Exhorder) and the bonus disc on the anno 2000 Manifestation compilation, Malevolent Creation can be credited for brooking their time until it was appropriate for a long form live record. This happened in 2004, after 13 years of releasing albums, through the Arctic Music group, and it was called Conquering South America. A far better alternative to Monstrosity's Brazilian live record, this was also recorded in that considerable nation during the band's 2003 tour (their first in that country), and though the fans' shouts of appreciation might feel somewhat repressed next to the music itself, they were certainly content by the material being battered into them.

To boot, Conquering South America actually sounds pretty exciting. The guitars are fibrous and thick, while you get a strong taste of the bottom end base and concrete drumming (courtesy of Tony Laureano). Kyle Symons' vocals here are acceptable, but perhaps the weakest element of the mix in summation, and the vibrancy of the guitars does barely enough to compensate. There are about 60 minutes and 15 tracks here in the album set, spanning most of their career, from cult classics like Retribution ("Eve of the Apocalypse", "Coronation of Our Domain", "Slaughter of Innocence", "Monster") and The Ten Commandments ("Multiple Stab Wounds", "Malevolent Creation"), through the middle years of Eternal ("Blood Brothers", "Living in Fear", "Infernal Desire", "Alliance or War") and The Fine Art of Murder ("To Die is At Hand", "Manic Demise") and the more recent Envenomed ("Kill Zone") and The Will to Kill ("All That Remains", "Rebirth or Terror").

I was actually quite pleasantly surprised that some of my least favorite Malevolent Creation albums, Stillborn and In Cold Blood were omitted entirely. They stuck with the good stuff, and that counts for a lot. In particular I found the muted, chugging sections on the albums seemed choked with energy where they otherwise might seem boring, and the band leads into the set well with the intro to "Eve of Apocalypse" and then systematically shifts between rhythmic poles to keep the set violent, fresh and interesting. Granted, I'm not a huge fan of all their material, but aside from perhaps the too splatter-pasted vocals of Symons, (which hold it well back from the ranks of good or mandatory live recordings), this is not so disappointing an experience, and one that was released in its own due time.