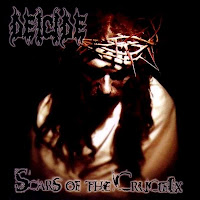 Right from the opening credits, Deicide's 7th album already seems like a jilted bore. Of course, I'm talking about the rather bland cover image, an area which has never been the band's forte (but at least the first two albums had cool symbols present). Unfortunately, the growing pains here run far deeper than just the bland image of Jesus above which an empty logo and title are imposed. You see, Scars of the Crucifix suffers from the same fate as its predecessor, the oft maligned In Torment In Hell: the songwriting sucks. Granted, this was a period of turmoil for the band. In fact, this is the final album to involve the Hoffman brothers, but from the sound of things I have to suspect that there was some unrest somewhere which turned into the acceptance of sub-par material being ushered forth.

The production is perhaps a notch up from In Torment in Hell, but this is yet another empty canteen of blasphemous sustenance in a desert of dried ideas. Deicide had in effect become a paragon of the very generic, faceless death metal they helped influence across a thousand other, aspiring bands. Pedestrian chugging rhythms intertwined with streams of half baked streams of blasting mutes that fail to generate even a handful of fingers worth of quality riffs. "Scars of the Crucifix", "When Heaven Burns", "The Pentecostal", and "From Darkness Come" are littered with truly lamentable snoozing palm mute mosh rhythms unfit to shine Pontius Pilate's knob. Deicide had never exactly scrawled out malevolent notation worthy of the standard of shock and brutality beneath which they marched, but these songs don't even feel remotely aggressive and muscular, traits that made Legion such a success.

Even the titles continued to feel lazy. "Fuck Your God", "Mad About God", "When Heaven Burns", its all the same shtick the band have been churning out for years, and while some might find this devout dreariness as 'refreshment', or a band unchanging in the face of an ever expanding genre, it simply isn't going to cut it. Scars of the Crucifix maintained the same slicing leads as the albums prior to it, but they also seemed indifferent and dialed in at the last moment, with zero appeal beyond their own writhing, sporadic and sudden existence. It was honestly no surprise when Benton announced that the Hoffman brothers were out of the band. Whatever personal issues existed, whoever was in the right or wrong, this lot were simply not making any music of note together, and had not been for years. Fresh blood was necessary, and fresh blood would Glen Benton find in some worthy scene veterans who were kicking about loosely.

Scars of the Crucifix is another of the cult heroes' darkest hours. It persists as an example of why one should break the bread before letting it grow stale.