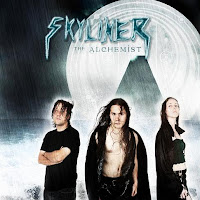 The Alchemist is the third independent release from the Florida act Skyliner, and it manages to draw upon the memorable strengths of its s/t predecessor demo while addressing several of the production issues that were present on that release. There are two new tracks here, and they wisely focus on the band's heavier side, redolent of "Symphony in Black" and "Vendetta" from the Skyliner demo, but overall even more solid and hook-heavy. In fact, while there might still be some faint concerns or decisions spotting the 13+ minutes of material, this is ultimately something the band should be able to shop around and acquire some attention, assuming there are still labels interested in actual songwriting, which is cleary Skyliner's forte.

Not to detract from the individual members' abilities, of course, because here they also seem to excel. Jake Becker's vocals stand out in particular, a mix of cleanly tones akin to Falconer's Matthias Blad or Rage's Peavey Wagner, often surging into the latter's gravelly aggression when it suits the momentum, often going even further into a near growl, or a high pitched scream (in the bridge to "The Alchemist"). I can't say I cared much for the female backing vocal in "Undying Wings". Not that it's bad, just a little tacked on. However, Ashley Flynn's synthesizers are a much snugger fit to "The Alchemist", where they help maintain a mildly progressive atmosphere to what it is otherwise a straight speed/power metal tune. They just sound so much better than the last release. The rhythm section is also quite tight, with Ben Brenner's rock solid drumming and a curving, delirious bass presence courtesy of David Lee Redding. This guy has the ability to 'go off' without grating against the rest of the instruments, and it provides a lot of ear candy beneath the solid speed rhythms and Becker's incredibly effective leads.

So effective, indeed, that one of my other complaints from the last demo (lack of strong rhythm guitars during solos, etc) is rendered inert. For example, in "The Alchemist", the bass and drums are so tight in lockstep that there is no other choice than to just let the lead soar your spirit, and that takes some class...and the bridge/lead in "Undying Wings" is even catchier than that! Where so many guitarists dabble in needless self-indulgence and wanking exhibitions of technical ability, Becker has very carefully conscripted his notation to provide maximum emotional resonance. And that, my friends, in a nutshell, is why Skyliner is well worth checking out. Painfully few US bands engage themselves in such an admittedly European slant on melodic power, and if you're a fan of the 90s (and beyond) material from a Rage, Scanner, Running Wild or Angel Dust, The Alchemist is worth a shot. The production, while polished and functional, could still use a little work, and its obviously short, but the songwriting and lyrics are spot on. I'd love to hear how they tackle a full-length.