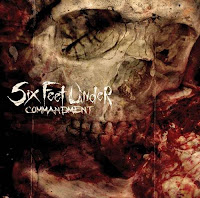 Few are the bands which deserve the proverbial fork stuck in them more than Florida's Six Feet Under. Yet in stark defiance of their utensil wielding detractors, they persist year after year in releasing vapid, uninspired studio albums amidst their sodden live recordings and useless, numbing collections of cover tracks. Commandment comes along with its bloodied skull leering out at the prospective audience, and I'd so like to add the caption 'LET ME OUTTA HERE', because Chris Barnes and company have once again fallen well short of what it takes to release a proper death metal album, or a proper death & roll album, or whatever the fuck this middling collection of palm mute grooves could rightly be dubbed.

The only real credit due to this album is the production, which is enormous and thus entirely wasted on such sodden, underwhelming songwriting. Because of the sound itself, the album will trick the listener into thinking its heavier, more crushing, more legitimate than some of its pathetic predecessors like Warpath or Bringer of Blood. But once we cut through the smoke and mirrors of the actual engineering, this is nothing more than the usual, pedestrian grasp upon horror culture concepts like "Zombie Executioner" and "Resurrection of the Rotten", delivered through minimal and ineffective note sequences that generally consist of about four chords open or muted, in simple ascending and descending patterns that just about any guitar player with distortion could write in seconds. I might not mind the lyrics if the music were good. But who exactly writes this material? Barnes? Or Steve Swanson? Considering the loyalty through which these members have persisted together since Maximum Violence, one might expect some level of evolution.

Yet these are more or less the precise same sorts of riffs that populated the early albums, with only the brighter sheen of production to lend them weight. There's one lead sequence in the final track, the bridge of "Ghosts of the Undead", which almost melted my mind it stood out so far from the dull bludgeoning around it, and its presence alone leads me believe that the musicians involved in 6FU could actually write some half-decent material if they stopped phoning it all in to Metal Blade, but I won't cross my fingers. Nope, these are the same chugging abortions that the band have always conjured forth, a limp hybrid of Obituary and Biohazard that goes absolutely nowhere fast. Commandment does maintain some variation between faster and slower paces, but its all incredibly weak in the knees considering the muscle of the mix.