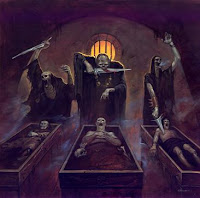 The inherent value of the Awakened by Gore collection will rest almost entirely on whether one has already acquired the 2000 comp Ridden With Disease that came out via Necroharmonic Productions. Granted, this Nuclear War Now! release is one for the vinyl purists, being released with some spiffy, appropriate artwork on two LPs, with special editions available that include all manner of goodies. It's also more extensive than its predecessor, with 13 tracks opposed to the 9 there, but I can't say that the audio extras offer much of an incentive, just crude rehearsal tracks that in no way supplant their ultimate, ideal studio incarnations.

If you haven't guessed, this is a re-pressing of the Californian band's original demos from 1987-88, before they had gone to Peaceville for the classic Severed Survival. As I mentioned on my writeup for Ridden With Disease, the demos offer a crude and fun interpretation of several album classics and a few that never really made it to one of their bigger albums. Expect a distinct but downtrodden demo production, but Autopsy manage to pull it off with their grimy, proto-death compositions and atmosphere, both traits having now gone on to influence countless shadow acts who cite Chris Reifer's creature as legendary. Alas, the raunchier rehearsal material like "Disembowel" or "Embalmed" are really only needed if you're the sort of person that would purchase Michael Jackson memorabilia or some super model's used lingerie on eBay. Necessary only to the obsessive.

If you do NOT own Ridden With Disease, and you love your vinyl double LPs or other such releases that provide you with a taste of nostalgia, then this is the paramount release of the demos. Otherwise, Necroharmonic already took the initiative on this a decade earlier (with Hammerheart/Vinyl Collectors releasing an LP of that album). I'm ranking this slightly lower due to the whole egg before chicken novelty, but if you're a sucker for records, then consider this the chicken before the egg that grew into that chicken. Both will inevitably be rare enough that just finding one of the two should suffice.