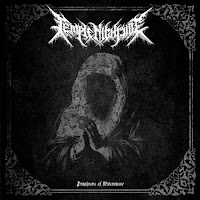 The snag in defining an effort like Prophecies of Malevolence is that it's so successful at its dark ambient elements that I'd almost rather place it in that category than the black metal itself, which often feels as if its riding in the passenger seat. But in general, these Australians have found themselves an engrossing balance of swelling oblivion and writhing, snarling madness that is guaranteed to haunt anyone who falls prey to its shadowed, vaporous clutches. In listening through this EP, I felt as if I were directly upon the precipice of falling night, as if my very footsteps were skirting its border, my eyes and ears a mute witness to the horrors of its life-leeching, opaque embrace. I'll say it here: Temple Nightside might have some issues, but beyond any doubt, they live up to their fucking name.

Prophecies of Malevolence is essentially one, grief-strewn saga woven into nine fluid tracks, five of which are ominous, ambient pieces which swelter and drone as if they were born of a vast, vacuum void-maw upon the threshold of madness, sucking souls into the nothing of its being. These tracks are titled "Commune 1.1-1.5", though they're each given titles, like "Eclipsed Salvation" or "Malediction Evangelist". The remainder of the release is comprised of solitary, distant black metal overtures. The percussion is quite low in the mix, tinny and hammering against the more resonant guitar tones, while the rasps breathe out like dense specters lost in a frozen mist. This is not necessarily a riff-oriented band. Think of some minimalist parallel to old Emperor, at least in the guitar department, which in itself transcends into some ambient force of chaos right at the edge of perception.

That's not to say there is no structure present. For example, the slower paced track "Acolyte Abomination" in particular evokes some ghastly dissonance through its shimmering rhythms. But the majority of these metal tracks, like "Incipit - Relinquished" and "Twelve Divinations of Spheres Beyond", thunder along with abandon, and the listener always feels so far away and helpless, as if there were no way to stop whatever nihilistic vortex the band were summoning. To their credit, the atmosphere alone is kind of cool, but it definitely would not harm them to pen some more jarring or memorable guitars, even if they keep such a far off tone in the mix. The sheer ambient tracks, on the other hand, are quite amazing, and despite the minor nitpicks, a sit through of the entire 27 minute EP yields an eminent fear and harrowing.