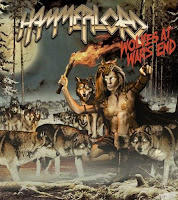 This American thrash band, hailing from the small college town of Lawrence, Kansas, is one of the better and more aggressive bands to pop up in this latest New Wave of Thrash.

Hammerlord plays a dirty Sodom and Kreator influenced Thrash: fast, pissed off and taking no fucking prisoners. Hammerlord may be a bit more messy than say, your Vektor, or your Havok, but they bring the "rage" in "raging thrash" more than either of those two luminaries of New Wave Thrash. While some tunes are fun lyrically (Tombstones Piledriver), every track is intensely aggressive and their love of German Thrash really comes through. To my ears, Bonded By Blood would be the closest of the New Wave Thrash bands to Hammerlord's sound, in terms of production and the gestalt of their tone, but Wolves At War's End clearly has more in common with Kreator or Slayer, than Exodus.

The production is the quality you would expect from a signed band, and is really quite good for a self-produced demo. Adam "Hammerlord" Mitchell actually mastered the album and mixed the tracks himself at his studio where he produces for a number of local Kansas bands.  He told me that he was going for a more full and deep sound on Wolves At War's End than the standard 80s thrash production; more along the lines of death metal or latter day Kreator. Although the drums are occasionally a touch too loud in the mix for my tastes, the production does call to mind the dulcet tones of Hordes Of Chaos or Enemy Of God, minus the brickwalling, so I'd say he achieved his goal.

The "Hammerlord" anchors and powers this little steamboat at lightspeed, which is exactly what we would expect given the eponymous nature of the band's name. Adam plays Thrash drums as fast and aggressive as I've heard anyone do it. There are some nods to modern metal drumming styles which I enjoy, because the modern touches are used very effectively for emphasis, and allow more dynamics in the rhythm section than more straightforward thrash drums. Also admirable is that Adam manages to achieve hammering precision without sounding like a robot.

The vocals are a definitely out of the harsher side of thrash, ala Slayer, Kreator, Sodom, Destruction, etc., but they really fit the style that Hammerlord is playing, and lend extra aggressiveness to the album that would be missed if they used a Bay Area style vocalist instead of Steve. Steve Cruz is quite good on this album, comparable to a slightly less guttural Tom "Angelripper". Also, the lyrics are a net plus, but it would behoove Hammerlord if the lyrics Steve was writing were a touch less goofy. To me, their sound fits better with social/political commentary or some evil occult rituals than the goofiness embodied in some of their lyrics, but I'll admit that they do achieve a good balance between fun 80s pop-culture references, and more serious topics. Besides, The Undertaker is still metal right?!

The riffs are fresh and not overly-derivative, as many of the New Wave Trash bands can be (I'm looking at you Bonded By Blood). However, while the riffs aren't boring, they are not necessarily the most catchy either, since aggressive speed is the focus. That's not to say the riffs are bad, in fact the riffs are quite good, just not epically, unforgettably great, though they will get your blood boiling for the duration. In addition, the leads are well done, particularly in "The Anomaly Rue" and "Creating Destruction", but not quite stratospherically amazing or catchy enough to sustain the attention too far beyond the end of the album.

I'm a bit surprised that Hammerlord hasn't been snatched up by Earache yet along with Bonded By Blood, but with the Japanese snatching up copies of Wolves At War's End left and right hopefully their status will quickly go to "signed".  Hammerlord definitely resides in the top end of New Wave Thrash, and while I am still anticipating an Epic Win from them, they have done really quite well here with their sophomore. I recommend this to anyone seeking more of that classic aggressive Teutonic Thrash sound, who is open to good New Wave Thrash.