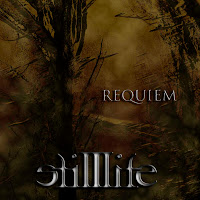 You'll find progressive/power hybrids like Stilllife hiding in almost all corners of the United States, but relatively few of them ever seem to cross my desk in recent years. Granted, there's a good reason for this: the genre seems to possess a wide gulf in quality between the bands who have made it (Dream Theater, Fates Warning, etc) and those who must forever solicit the shadows of such names, and I'm sad to say that Requiem remains quartered in that second group. Stilllife are a group of guys from Michigan interested in conceptual lyrics affixed to simple, bold and soothing guitar rhythms. This is not the sort of progressive metal stoked upon its complexity, needless wanking or excess. The band attempt to engage you with directly with the inherent melody of their riffs, and a decidedly Ray Alder like front man.

Unfortunately, this guy is no Ray Alder, and whether it's just the fact that his vocals are up far too loud in the mix, or that he simply doesn't hit all the notes quite perfectly, I found myself very often unnerved in listening through the disc. They're at their worst in the opener "A Godless World" and the slowly developing ballad "Requiem, Pt. I: The Oracle", and strangely enough, they seem to clean up when he projects himself into a higher range, but they provided a clear obstacle for my appreciation of the music as a whole. The remainder of the album also feels a bit unpolished, with the guitars rather raw for this style and the drums a fraction too tinny, and I'm sure they'll want to polish this up for future releases. The writing itself is not necessarily so weak, and the band channel between some basic thrash and trad metal chops with inherent versatility, peaking upon the 10+ minute beast "Hypocriticism/The Becoming", or "Fruit of the Fallen Tree" in which the music and voice seem to gel fluidly.

It's ever unfortunate to be underwhelmed with an album like this, because Stilllife is clearly not interested in what's hip or trending, but in developing a distinct aesthetic for themselves. Granted, this is not entirely novel, and Fates Warning (1988 on) is clearly the precedent, but Requiem is not entirely indebted to that sound, as its incorporates some crushing groove sections amidst the gleaning melodies. I'd be lying, though, to deny that Stilllife has a LONG way to go if it wishes to advance itself in this field. The vocals, production and writing will all need some work to sate the attention spans of the Kamelot and Evergrey-starved international power/prog audience. At 63 minutes, Requiem at times feels like an overly bloated demo, but I've certainly heard worse, and if they can persevere through the adjustable setbacks here, they might breed some interesting ideas in the future.