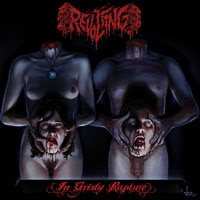 It's occurred to me that Rogga Johansson might not actually be a single, distinct entity, but more a series of human clones reared on the classic death metal of the 90s. This army of identical twins is bent on single (errr...many-handedly) overrunning the entire sub-genre of Swedish death metal, slightly edging out the scumbags and poseurs until it consists of merely him and his selves, and those lucky enough to be his co-conspirators. Revolting is one of his myriad projects, and one of the best at summoning forth the composure of forebears Entombed, Grave, Dismember, Edge of Sanity and Unleashed into the now, with an endless series of originally but admittedly derivative songs that will have much of the purist audience in heat to grind their teeth on its meat.

In Grisly Rapture immediately seems somehow more...serious than either of its predecessors. Not that the decapitated heads, bloodied stumps and genitals on the cover are an indicator, but just through the composition alone. Stylistically, it's not a far cry from either Dreadful Pleasures or The Terror Threshold, but there's a more sour sense for melody inherent in tracks like the opener "Hell in Dunwich", "The Plague of Matul" or the bridge of "Human Exterminator". Then again, this is just the opening batch of material. Later on the album, we have "Dr. Freudstein", "Sucked Into the Sand" and the rockin' "Devil Witch", all of which bring back that frivolous flare, that inanity which distinguished the earlier records as all too fitting for the Razorback roster.

Unfortunately, while this is indeed a solid set of riffs with some obvious care placed in their construction, I just didn't find it to live up to the last release. To Rogga's credit, he does not seem exhausted or entirely out of steam here. There is some fraction of creativity being applied to the riffs, even if they're largely paraphrased from the genre classics, or his own work in other bands like Demiurg, Paganizer, and Ribspreader. The production is good, the vocals and guitar tone all too sincere, but unlike Dreadful Pleasures or The Terror Threshold, I was not struck with the immediate desire to keep spinning through its contents. Not a waste of productivity, and perhaps satisfactory to diehards for all things this sub-genre, but the guy's done a lot of better albums than this and I'm sure he will again in the future. Ghoulish good, but not ghastly great.