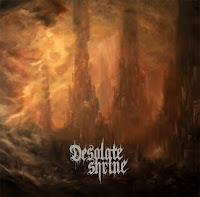 Another entrant into the atmospheric death metal derby, Finland's Desolate Shrine seek to match wits and a crushing miasma with one of them most monolithic, harrowing tones I've heard yet. This is sheer 90s gristle cast in a vaulted construct of pain. Think of the slow, desolate slog of Bolt Thrower colliding with the simmering Swedish groove and tone of Entombed or Dismember, and then add two vocalists, one with the expected guttural tone and another with a slightly higher pitch. A bruised and bloody duo howling from the cavernous, decrepit depths of the intense guitar mix, the brute and warlike drumming. I had initially misled myself to believe this would be more of a death/doom outing, due to the title, band name and cover art, but it's far more likely to appeal to fans of stuff like Vasaeleth, Denial, and Innumerable Forms.

That said, Tenebrous Towers does not quite sound like any of the above. It's almost uplifting, the curvature of the crashing guitar rhythms elevated towards the rafters of its subterranean habitat. Tracks like "Mouths of Baal" and "Born to Lose One's Way" are both expressive and vibrant enough to throw one off balance, though the band also has no problem hammering out faster, aggressive material like "Chaos and Wrath" or the burgeoning "Burning Devotion". They even take it down a notch for the most substantial piece on the album, "The Brightest Night", a spacious (8+ minutes) elegy which inevitably erupts into violent tumult. But the most catchy tune on the album is the opener, "The Smell of Blood and Iron", with a very Entombed like underpinning rhythm morphed into layers of rust and lichen peeling, savage melodies.

On the downside, not all of what Desolate Shrine are penning necessarily sticks to the ear, thus it becomes more of a work of resonance than intricacy, a loud titan beneath the earth, afraid to subside as it shifts the landscape about it, but an earthquake that one is likely to forget before too long. Still, if you're interested in wallowing in such an atmosphere, Tenebrous Towers is a good place to start, a port of call where old school Swedish and Finnish influences gather and interbreed, then drill their way into the spaces below.