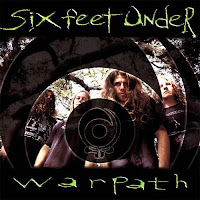 While in no way, shape or form could I consider Haunted a success, or a 'good' album, it at least had that nudge in its favor of Obituary-styled riffing and a blunt and angry Barnes. It was a control group, from which quality material might have sprung had the members of Six Feet Under been able to place two and two together, writing towards catchier vocal lines and more intricate rhythm guitars. Alas, Warpath would put an end to such possibility, a hideous slab of sun 'baked' excrement that does nothing to further their case. This is but a vapid array of re-arranged Obituary rhythms shat forth alongside some of the most effortless rock riffs I've ever beheld, an astounding failure of pedestrian LCD lyrics and worthless music, proving once and for all where all the talent went after Barnes split with Corpse.

Pathetic in all ways, the straggling audience members are subject to boring ass political lyrics which show not even the strength of the first thrash bands in the 80s to adopt its positions. I've always found it unusual when a band alternates lyrics about serial murder with flexing their first amendment rights, which is precisely what Chris Barnes is doing here. Just read the chorus of "Manipulation" and revel in his wondrous chorus ability: Don't speak to me about freedom, don't speak to me about being free (and refrain). Are you fucking kidding me? You probably could have improved something better than that. Then, of course, there is the mighty marijuana hymn "4:20", Six Feet Under taking up the bandwagon alongside the other amusing pothead manifestos of the 90s like Cypress Hill. Sadly enough, this is the most poetic of the lot, though the music and vocals suck, Barnes adopting a more emotional canter to abominable that you wonder how he got through it without breaking into laughter. In addition, there are a number of tracks in which he issues a raspier vocal tone which is unintentionally hilarious.

At its very best, which is to say almost NEVER, Warpath sounds exactly like a derivative of World Demise or Back from the Dead sans the good vocals. Where Obituary were steering to a more hardcore/groove influence, SFU (which also might serve as an acronym for SHUT THE FUCK UP) were inserting straight rock & roll ("4:20" or the punky "Revenge of the Zombie") beyond the drumming. About the only remotely acceptable song is "Death or Glory", but that's a Holocaust cover from The Nightcomers (1981), and adding Barnes bludgeoning drawl does nothing for it, much like his mediocre rendition of "Grinder" on the Alive and Dead EP. The mix is not a lot different than Haunted, but manages to render the material even more boring. It's true that a few tunes like "War is Coming" and "Animal Instinct" fall short of offensive, but Allen West had already done these riffs far better in his other band. Coincidentally, this is his last studio effort with the project. Who could blame him? After suffering through Warpath, all of us.