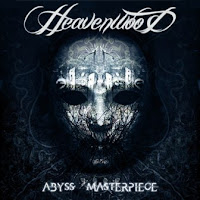 Outside of the obvious exception (Moonspell), Portugal has yet to really draw much attention unto its metal scene, whether that's by a sheer lack of individuals bearing the resolution and ambition to see it through, or a general lack of interest in the international space. That said, the 90s saw a number of Gothic, death/doom hybrids with ample potential, namely Desire and Heavenwood. The latter put out a pair of solid, memorable efforts in Diva ('96) and Swallow ('98), then took a 20 year hiatus before casting themselves back into the struggle that is the underground. In 2008, Redemption turned up, a rather forgettable return to form, but not without its moments.

Through Abyss Masterpiece, their fourth full-length, they return to the summit of accessible songwriting they achieved with the debut Diva, pleasurable enough listening for those that have not abandoned or eschewed the primary concepts of good Goth metal: sad, driving chords that are glazed in melodic overtures or symphonic swells, deep clean vocals and the added gravitas of the death growling. Normally, bands are hit and miss with this vocal hybrid, but Heavenwood excel in balancing the pair with a fluid, immersible contrast as opposed to dorky awkwardness. They also possess the ability to hit hard and hit often, even more so than their more somber, 90s records, and this results in an album balanced to evoke both sorrow and anger in equivocal concentrations. Tracks like "The Arcadia Order", with its escalating orchestral maneuvers and grunting climax, or "Goddess Presiding Over Solitude" and its chugging digs, are born of thunder uncommon to this genre, and its welcome.

Of course, you gotta travel a little deeper for some truly memorable impressions, and I found these in the fiery gloss of "Winter Slave", charging "September Blood" and the sluggish epic "Poem for Matilde", but the wealth of the 60+ minute track list is dynamic and emotionally powerful as it weaves through apertures of controlled terror and elegance. A few of the tunes, like "Leonor" with its guest female vocals, felt a little swollen and unnecessary, and several of the chord progressions throughout Abyss Masterpiece are too predictable, but on the whole you're getting a fine tuned experience with much polish in the production department. This is certainly a more symphonic affair than Diva or Swallow, but if you're seeking out some solid Gothic metal or a more subdued alternative to the cataclysmic swelter of Hollenthon, Therion and the recent Septic Flesh material then you may damn well want to give this one a spin.